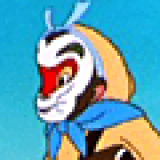 onlyamonkey
August 2009 edited August 2009 in Wallace & Gromit
Not being a previous fan of W&G, now having played through all 4 parts of the season. A few points:

Control
4/5
Au contraire to what seems to be the general opinion, there's absolutely no issues on my part with controls. A few minor spaces were awkward at best, but that's pretty much it. Easy to navigate and so on. Well done there.

Graphics
4/5
In general it was good and well done, but what really drags it down is the thresholds between polygons (mostly in episode 4), which were tacky and clumbsy. In a house, it's ok if there's some unfinished work, but not in a facial close up. Although I understand limitations are in order, there's no excuse for being sloppy. And it was sloppy, which made me understand it was rushed. And that's not a good thing when I'm paying for a quality merchandise. It's not Ryan Air you're dealing with here.

Gameplay
5/5
Most stuff went smooth apart from minor glitches which I had no bigger issues with. Most glitches were solved by pushing "esc" and then continuing game.

General
4/5
Episode 4 really felt rushed, but all in all it has been a sweet experience even for someone like me, who doesn't enjoy the sense of humour or gets turned on by a subexciting storyline.
Sign in to comment in this discussion.