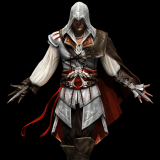 In celebration of the upcoming S2 (which is amazing), which characters would you love to see again the most in the S2?

Mine would be Bigby, obviously, and Nerissa. Please bring back our favourite mermaid!