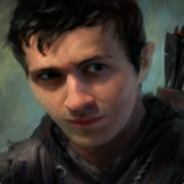 HarjKS
August 2017 in The Wolf Among Us

Throughout all five episodes, have the Woodsman make an appearance/quick cameo where you have the option to [Glass Him] as he's saying hi to you (anywhere outside a bar he probably just has a paper bag with a bottle inside and Bigby just happens to have a bottle he's carrying).

But the twist is that [Glass Him] actually means you just knock your glasses together.

Until the very last episode where it means to actually smash his head over with a glass bottle because the story is getting tense and Bigby is in no mood.

And if you wanna be even more evil, have the game autosave during this so without "Rewind", players will have to play through the entire episode again if they want to not push over the Woodsman.