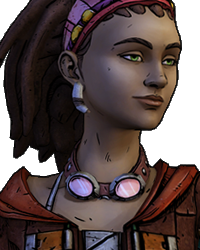 Monday_Headache
March 2018 in Tales from the Borderlands

Hey Guys,
I always figured there was something that connects Vallory deeper to the story of Sasha and Fiona and probably Felix as well.

I mean we have

I just can´t see here as a Gangster Boss that is only pissed about a fake deal that went to fail. But i can´t place if she either wants to take revenge on Felix or if she has some kind of odd familial relationship to them, or maybe even something different?
So tell me what you guys think and feel free to share your opinions