True Mordecai the Undying [In context of THE ENTIRE BORDERLANDS series] 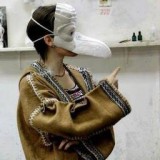 Klopotinsha
March 2018 edited March 2018 in Tales from the Borderlands

full title of the thread is:

The Vault Entrance to the general thread about Immortal Steel Cojones, True Mordecai the Undying, Protector of Jimenez, Sworn Enemy of the Incubus! [In context of THE ENTIRE BORDERLANDS series]

[Careful, slightly contains spoilers to Entire Borderlands series, though quite blurred, and some, I think, are good to know before playing games.]

If you're interested who this weird one who dragged Athena out, and what REAL he has in common with Ancient Guardians;

And you'd like to learn more about different epochs of Borderlands, all of which he has witnessed;

And you'd like to share your original conscious reasoned opinion and contribute more amazing facts about the phenomenon:
Feel free to join this BADASS investigation and HAVE FUN!

Here is the link to the original thread with BIG LONGPOSTS at Official Gearbox forums https://forums.gearboxsoftware.com/t/general-thread-about-immortal-steel-cojones-true-mordecai-the-undying-protector-of-jimenez-sworn-enemy-of-the-incubus-in-context-of-the-entire-borderlands-series/1640935?u=klopotinsha
It doesn't seem ready to respond... Not at this stage, i guess.

So i have a thought that maybe the audience of the quest genre game of Borderlands series can be more interested in cool stories, puzzles, travels, archaeological finds, philosophy, anthropology, aesthetics and marvelous adventures...

C'mon, show me whatchu got!