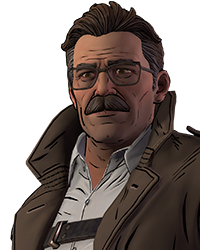 OK, so where to start?
First of all, I really enjoyed the story and the choices. The fact that it made me want to open this discussion is proof of that. Also when I say "Classic Batman", I don't say that my choices were what the "real" Batman we all know would do. This is just my interpretation.
This discussion is about the choice between Gotham and Selina. So let's get started.

Let's Talk About Season 2
In Riddler's Lair, I told her I was undercover and if she actually did switch to a life of crime, she'd be going down same as the others. Again, THE MISSIAHN BEFORE ANYTHING. And look at that, the next moment she refuses my help, betrays me and runs off with the decrypter without even talking about it. I don't care if she wants to stop them. She better be ready for retribution.
At the GCPD's rooftop, I obviously didn't warn her about GCPD coming after her because I thought she'd be able to get away and the cops would slow her down. Giving me enough time to get to the laptop before her. The perfect situation. And if she gets caught? That's on her. This is my retribution.

Wayne Manor
Sooo... Catwoman shows up all beat up and I feel really bad about it. I tell her the truth and that she betrayed me first, she first gets angry then thinks it's fair and we hug it out. I invite her to the batcave, we kiss & stuff and it's all good.

The Subway - Who is the mole?
For me this was the hardest choice in the story, because it was a choice between two things I cared about the most. (Other than Alfred, Gordon etc.) The city I've sworn to protect and the woman I really like.
I see two potential scenarios here: (What happens next in Episode 4 is not taken into account here.)

SCENARIO 1 - "Classic Batman"
Other than SANCTUS, there are customers at all time in the Bodhi Spa. I'm only the one that can minimize the death count during the attack. More importantly, there is a possibility of a city-wide pandemic and I definitely can't allow the virus to go into the wrong hands. The choice is clear. I have to sacrifice Selina for the greater good, to save lives and hope that she will be able to escape. I would be betraying her twice now and right after our "relationship" started. I doubt she will be forgiving after that. Therefore I end up alone.
SCENARIO 2 - "Naive Batman"
Bruce is really touched when Selina says that she feels like she can be better around Bruce and found redemption next to him. So when it comes to deciding the mole, Bruce believes that Selina can also prevent deaths in the Spa and sacrifices himself for her. Tiffany is not an issue here because the Pact is going directly to the spa, there is time to warn her.

I'm really interested to know what you think. Did you warn her or not? Which scenario more plausible to you? Do you have your own scenarios? What choices did you make? What do you think "Classic Batman" would do? Please share your thoughts.