If there would have been a Season 3, what would you call the episodes and the story? 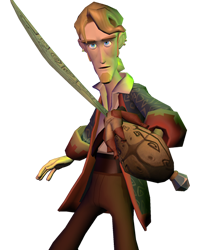 It's a real shame that Season 3 won't happen because Telltale will shutting down. But that dosen't hurt us to make up your own ideas about what it could have been. This is my version, with 5 episodes.

Episode 1: The Order of the Mirror
Jesse has returned with Petra, Lluna from their adventures. In Beacontown, things is going towards a bright future. Petra is finally planning to settle down in Beacontown and start her own adventure academy where new adventures will be born. While Jesse is helping her, something odd is going on. A new gang of mysterious adventures come in to Beacontown, to challenge the Order of the Stone for the throne. There is a new Order in town.

Episode 2: Trial by Adventure.
The new group who calls themselves the "Order of the Mirror" is challenging the Order of the Stone to an "Trial by Adventure", where the winners will become the new Champions of the world. Jesse accepts it and starts gathering his old friends back together, but after so many years of putting off, will they win... or lose?

Episode 3: It's... Who are you?
The leader of the Order of the Mirror is... Jesse?... A female/male Jesse who is now champion of the world. Our Jesse is now so disappointed that he/she just want to give everything up and never come back to Beacontown. Still, someone wants to help Jesse. To defeat your enemy your must know them. This "someone" will help Jesse to understand the origins of the Order of the Mirror.

Episode 4: Following a Shadow
Jesse has entred a world together with this world's Soren. A place where he/she never could have dreamt of. Everything looks nothing but perfect, too perfect to tell you the truth. But looks aren't everything. Under the gold and iron, lies corruption, oppression and cruelty. But even in a world there is still friend and Jesse is about to meet someone. Someone he/she hasn't meet in a very long time.

Episode 5: Battle of the Orders
The Orders are preparing for the greatest battle in the history of both their worlds. The alternate Jesse has evil plans for Beacontown, something that our Jesse must stop at all cost. Everything will turn into a fierce battle between the twins. Who is going to become the greatest adventures in all of creation, The Old Order or the New Order?

There you have some examples of a good story.