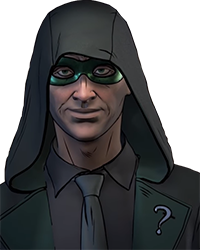 KitCloaky100
May 12 in Batman - The Telltale Series

I'm playing through Batman the Telltale series for a second time on a second save file recently as it has been about two years since I last played a telltale game. All episodes have downloaded, however the game doesn't seem to be registering episode 5's download and simply says "Owned but not Downloaded" and "Download Episode 5" despite the fact I have downloaded episode 5 and should just be able to play it, any answers would be valued but I recognise its unlikely