What Tales of Monkey Island: The Full Season 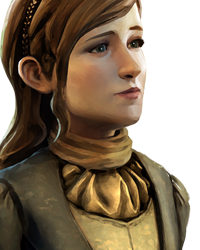 I had a great time playing Tales of Monkey Island and finished all the chapters in a few days since I couldn't put the games down. I'll start out by saying that I don't remember if I've ever played the classic Monkey Island games, and if I have, it was probably when I was too young to remember what they were called. Therefore, I won't base my evaluation of this game on comparisons to other games.

Puzzles The puzzles in this game are excellent and just what you would expect from an adventure game. Personally, I like puzzles that tend to be logical rather than pixel-hunting, and this game definitely met my expectations in that regard. Typically, when you need to find something or have discovered something while exploring. You can very much picture what you could use the items for. The puzzles aren't automatically considered simple, but you can kind of see how they work; you simply need to do a little more digging or take a few detours to get to each step.

You have to drag your mouse in the direction you want Guybrush to move, so it's not as simple as clicking a location on the screen and having him walk there. The controls are something I didn't particularly like (certain highlighted areas excluded). My hand and wrist cramped a lot since I spent much of the time "swiping" my mouse back and forth while holding down the left mouse button. I played for a while too, but no due to carpal tunnel syndrome. I briefly attempted using the keyboard arrow keys, but they are awkward in 2D/3D games as is typical, so I remained with the mouse.

Story
The story is adequate; nothing seems to be filler but rather a top-notch swashbuckling pirate adventure! I particularly like Morgan LeFlay's portrayal as the fearless pirate hunter, and I hope to see more of her in the future! The Voodoo Lady and other well-developed characters also make an appearance. And there are so many innuendos!

Other elements
My playtime, which was around 4 hours per chapter and roughly equal to the duration on HowLongToBeat, came to a little under 20 hours. Though I wish there were more loops in the background music, the voice acting and soundtrack are both excellent, especially the voice acting (as expected).