The Psychological Breakdown of Harvey Dent -- Batman: The Telltale Series 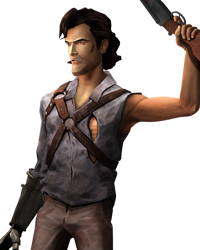 I was watching playthroughs of Season One of what I hope to be a lengthy series, and found myself particularly fixated on Harvey Dent's characterization, whilst I feel that on a general sense the characterization in this game helps it be one of the most interesting interpretations and takes on the classic Batman fable in years, in case of Harvey's arc the game was at it's strongest. It really tapped into the circumstantial tragedy that gave each of the characters an emotional, sympathetic thread for the audience to pour themselves into that mirrors The Animated Series, of which I feel that component is owed a large part of the series' success to this day and is certainly at least a large part of why I'm the avid Batman fan I am today. I turned a little ramble and armchair psychology into a little analysis I figured readers and fans here might get a kick out of gleaming at, so here's for you.

The psychological breakdown of Harvey Dent: Batman The Telltale Series

Factors of the breakdown:

-Pressures of being the mayor/making decisions that have major ramifications, decisions that regard every single life in Gotham, of which Harvey is dedicated –or obsessed, with carrying the responsibility and later, control for. This is agitated heavily by the ongoing terrorist attacks carried out by the Children of Arkham, not only increasing stress on Harvey’s well-being, but increasing his stress on acting out his goal of making Gotham a safer place.

-Psychoactive-Nerve toxin’s unrestrained effects/Exacerbating pre-existing mental conditions to the point they are easily triggered/untenable by himself. Note that Bruce Wayne is one of fiction’s most will-capable characters in history, and a heavy dosage of this toxin at several points impairs his judgement and temperament beyond his immediate control. Note that unlike Harvey, Bruce has a more accepting and intimate relationship with his alter ego and it's negative aspects (e.g. violent and/or risk taking behaviors) – The Batman persona and henceforth a greater hold of his subconscious mind in general, and is still too heavily affected by the drug being in his system to make proper judgement calls without being nuanced by it.

-Pressures of The Children of Arkham’s impending next strike. This is a more predominant factor in Harvey’s mental breakdown if you spared him the fate of being physically scarred, regardless of physical bearings, Harvey is still very much scarred by the events of the mayoral debate in episode 2, despite giving you his best efforts at displaying confidence and an eagerness to get back into the swing of things when hospitalized. He exhibits survivor’s guilt at being the only one of three to make it off the debate stage in one piece, and also feelings that the very victory he’s dreamed of came at a tremendous cost, wasn’t earned in that he only won via default, and that he is not a hero for failing to save Hill and the moderator as well as needing to be saved. This further affects Harvey’s sense of fate and likely gave him the impression that he wasn’t meant to be a champion of the people as he had hoped to be. (“If I win like this, is this fate telling me I made the wrong decision in running?” is likely what Harvey is asking himself when you meet up with him as Bruce post-event) added with his increased paranoia of being attacked/watched suggests that he believes it’s only a matter of time before the same grisly fate he avoided before catches up with him.

-Repression of a mental condition, whose polarity (“Harvey” & “Two Face”) are brought into serious distortion and imbalance upon all of these events coming to a head—The suspicion/or knowledge of Bruce’s sleeping with Selina. At this point, Harvey’s fatalism, the drug’s influence, the weight and bearings of leading a massive populace through a grim & tremulous chapter, and the belief that at any moment, The Children of Arkham will strike again are all matters tightly gripped by Harvey’s ego at this point. His ID and superego are in a constant state of clash at the moral circumstance, his fragile ego teetering between balance and imbalance. The encounter with Bruce and Selina, two of the only people his positive personality hinge on for support, is the last straw.

-The feeling that his best friend and love interest betrayed him and furthermore, sentenced him to a fate he had no mental or emotional reserve to handle given the time, culminated in the bridge between his primitive urges (fear, Two Face, unbridled aggression against the opposition) and his conscious desire to do good (hope, Harvey Dent, mindfulness and moral compass) to collapse entirely as Harvey compensates for what was likely, years of pent up feelings and emotions as he had tried to control himself in order to be the positive political entity he had worked up to. The harder you work at creating this mental lock, the worse the feeling when it is broken. The realization or belief that he could no longer depend on others for love or friendship gave his ID all the fuel it needed to grab for control of Harvey in his moment of weakness. At this point, nothing is in control for Harvey, and his growing obsession with fatalism and using his coin as a means of making important decisions is his only manner of expressing this hopelessness.

-As Harvey lets go and Two-Face takes the wheel, only a portion of his superego remains, this time the script is flipped and Harvey is submerged in his primitive feelings and behaviors. The coin’s potential positive outcome is the only thing tethering him to adhering to any sort of moral inclination. It’s his only hope as he no longer feels he can decide anything, that if it was fate that brought him to this point, only fate can bring him out. If Bruce’s confrontation with Harvey during City of Lights is unsuccessful in salvaging Harvey’s persona by giving Two Face what he wants, to kill Wayne, Two Face completely shatters any remnant of Harvey with his cheating of the coin’s split outcome, using the “Head or Heart” scenario as a catalyst for his superego’s death. He feels he now may only be fortunate by taking, cheating, and making “his own luck”. While as if Bruce is successful in reaching out to Harvey by appealing to his true nature, the coin toss becomes Harvey’s only hope of ultimately, truly conquering his evil persona, using the toss to enable him to override his selfish ID, and kill both himself and Two-Face in one shot. In an amazing scene, Harvey’s side wins out by allowing destiny complete control over his fate, as opposed to personally grasping for any control he could out of the situation like before. In facing his fear of fate head on and willing himself to be utterly sacrificed by the coin, his Two-Face persona is taken back and subjugated once more. Unfortunately, the coin still drives his actions, which if thrown by Bruce, ends disastrously as Harvey has a literal and figurative fall from grace, however if pocketed, shows that his evil side can be trapped and controlled by his better nature if he exudes the effort. I also feel that pocketing the coin may lead to better things for Harvey, as it serves as a metaphor for Bruce saving him and taking Harvey's fate into account personally, as opposed to tossing it away for chaos to take final judgement over.

Thanks for reading. Hope you all have a wonderful day.