AChicken
March 2018 edited March 2018 in Guardians of the Galaxy

I recently picked up the full Telltale tie-in comic a few weeks back. It all takes place before Episode 1, is about one of the Guardians' usual bounty hunts gone wrong, and provides a little bit of context to Thanos' involvement in the universe, and the start of his quest for the Forge.

Overall, I quite liked it. It really expands the world of the Guardians, adds in plenty of strange cosmic life, and probably features a bunch of hidden references to the greater Marvel Cosmic Universe if you're a big comics fan (I'm not... I wouldn't know what was real or what was made up. Still cool stuff inside.) It's not perfect, some things don't line up continuity-wise with the game's mechanics, but it's not game-breaking. If you like the game, pick this one up. It's a nice addition if you're looking for more TTGuardians.

The "main" story centers around the Guardians' quest to track down and retrieve this mysterious astronomer's assistant -- later revealed to be the telepathic Soviet space-dog, Cosmo. They're pointed to Sakaar, where they break him out of the fighting rings he's been captured in. Cosmo soon points the Guardians to Saturn's moon Titan, homeworld of Thanos (and his murderous cult following), where he claims there's a greater prize to be achieved, worth a lot more than the astronomer would have paid them. This ends up being a ruse, as this special object is Cosmo's old soviet space pod when he was first shot off the planet! What's inside? A bag of Russian dog treats. Yeah.

Thanos soon appears, and Drax -- short-sighted as ever, charges headfirst towards his mortal enemy, leading the Guardians to get him back and escape. Cosmo, still nearby, is discovered by Thanos and (as his original mission was to report back to the astronomer with the location of the Eternity Forge, later to be relayed to Thanos) trades the Guardians' safety for the location of the Forge. With Thanos' guard down, he gets zapped in the brain, so the Guardians make their escape, leaving their battle with Thanos to conclude another day...

One of the big differences in locale between this and the game itself is how think this comic is in overall world-building. Yes, the game does have a lot of that, but in terms of encounters and places the Guardians visit, they go to pretty barren, abandoned places and stray from civilised areas apart from Knowhere.
How I think the game can be improved in this aspect is just giving us more Cosmic Marvel locations. Show us more alien civilisations, more groups of people, or small villains with some sort of past. Most of what we got in the game is ancient temples, destroyed laboratories, and spaceships. I'd love to see something else next, more characters or bigger locations. Flesh out the world with what's going on now rather than what has happened long ago.

In terms of the comic being related to "Telltale's game" there are a few funny moments where they blatantly make reference to clear choices being made (go here, or here?), actual characters saying things like "I'll remember this, Quill." and there's even one string of panels being (Look at: X.. Look at: Y.. Interact with: R)
However, some stuff is quite odd in the grand scheme of things. Howard the Duck is taking their payments for docking fees, one of which they're late on (it could be they only start playing poker after this). One scene has Star-Lord escaping from Stakar (oh yeah, there's a Syverster Stallone lookalike here and his Ravagers), but he makes his gun appear out of thin air, like it materialises in his hand, whereas all other scenes of him in the game show him having to manually holster/unholster it for combat.

So, yeah. Pretty good tie-in comic, hopefully if the game series continues... sometime... it can take some hints from this in terms of the "galaxy" to protect, instead of the "Knowhere" to go to.

Here's some pictures of the comic (as best as I can steady the camera and get good lighting on it without glare). 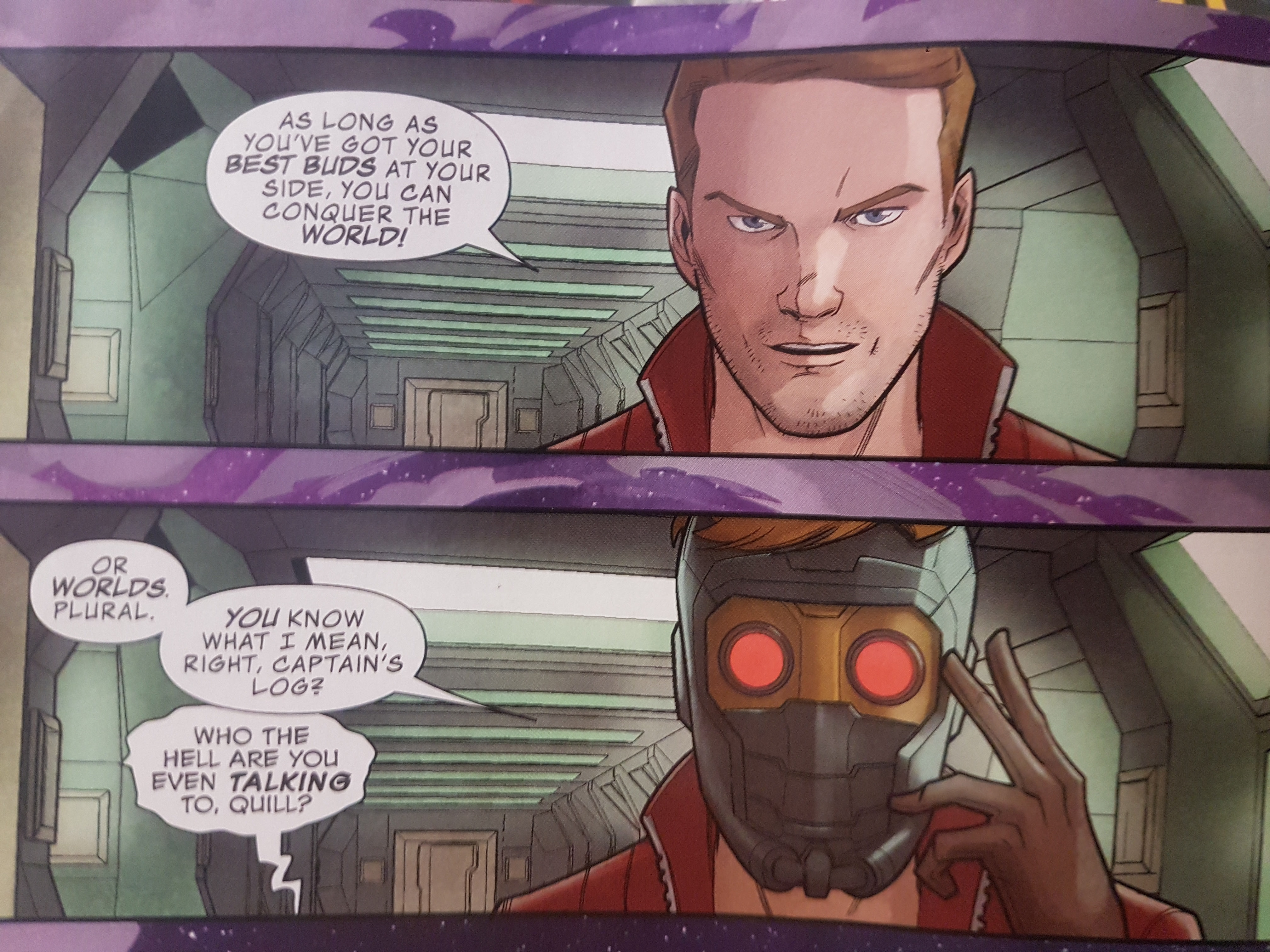 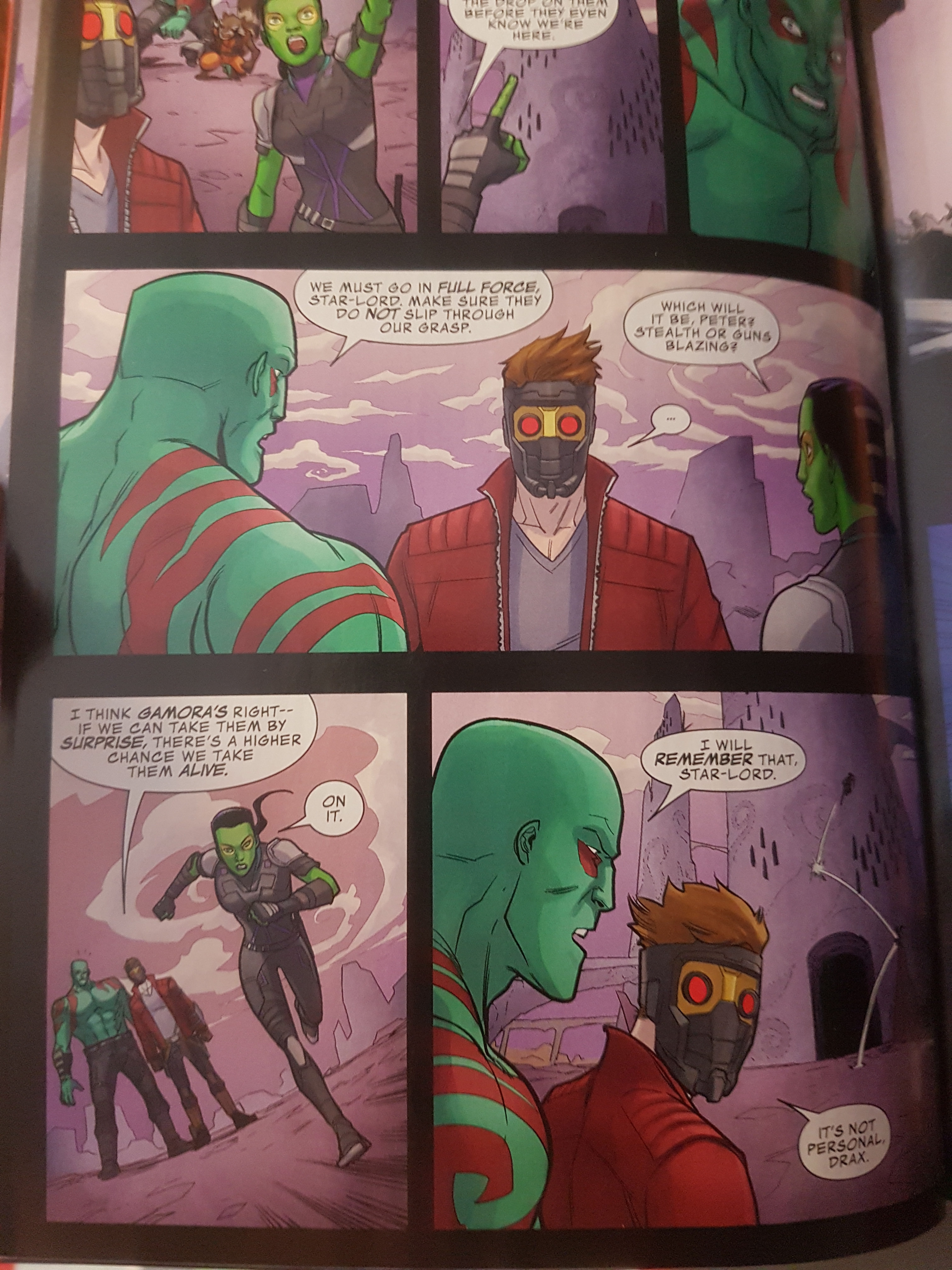 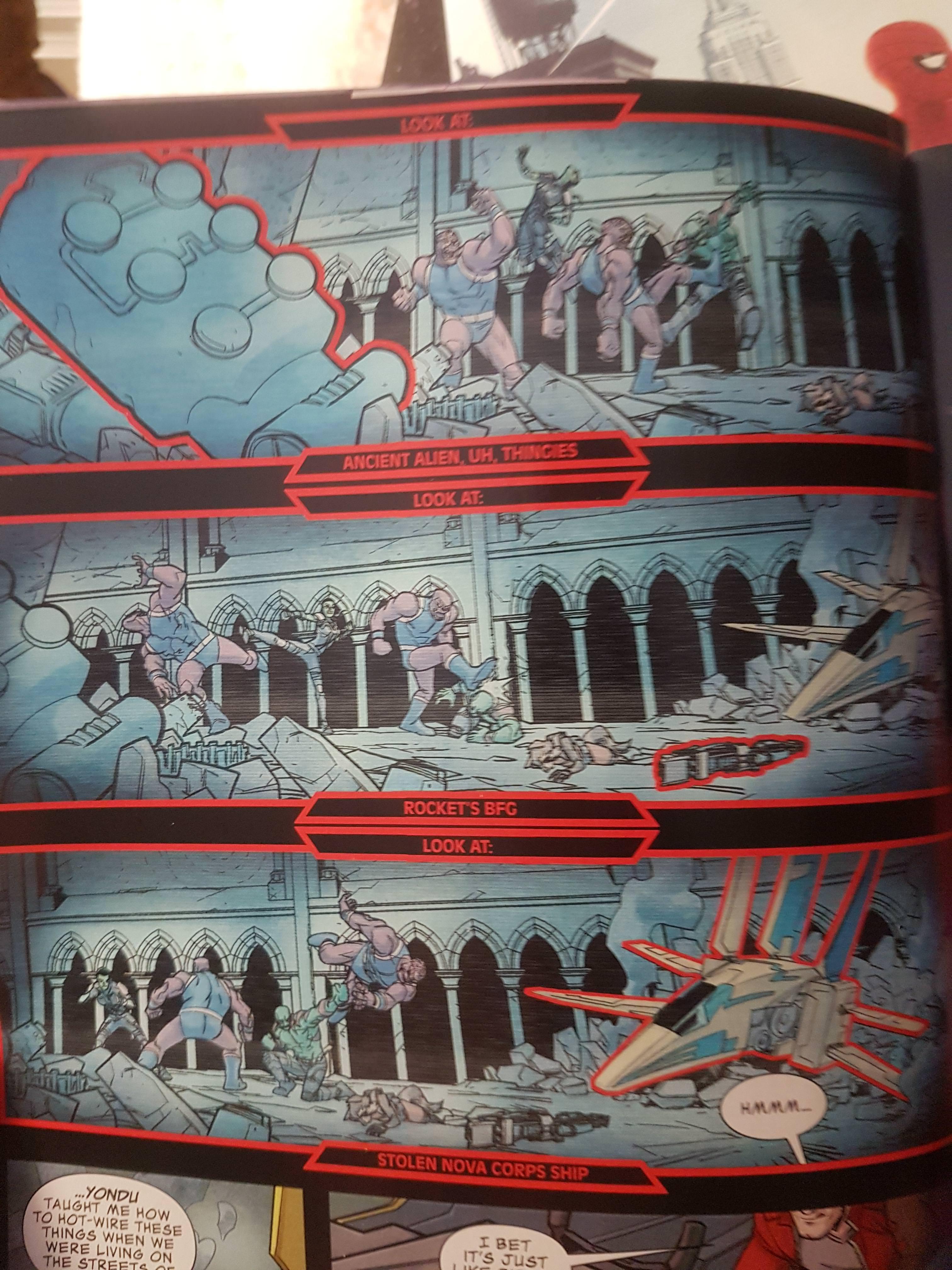 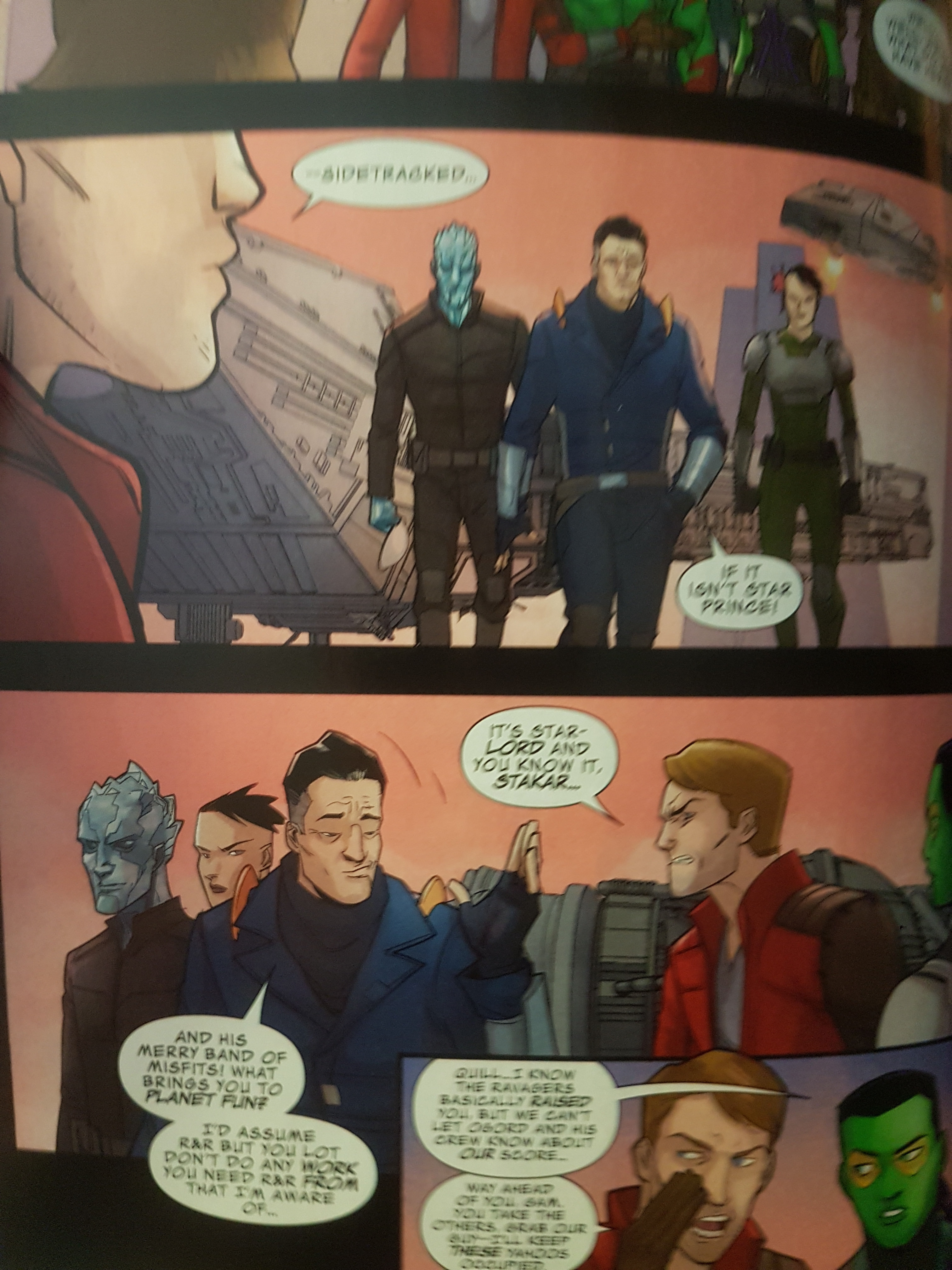 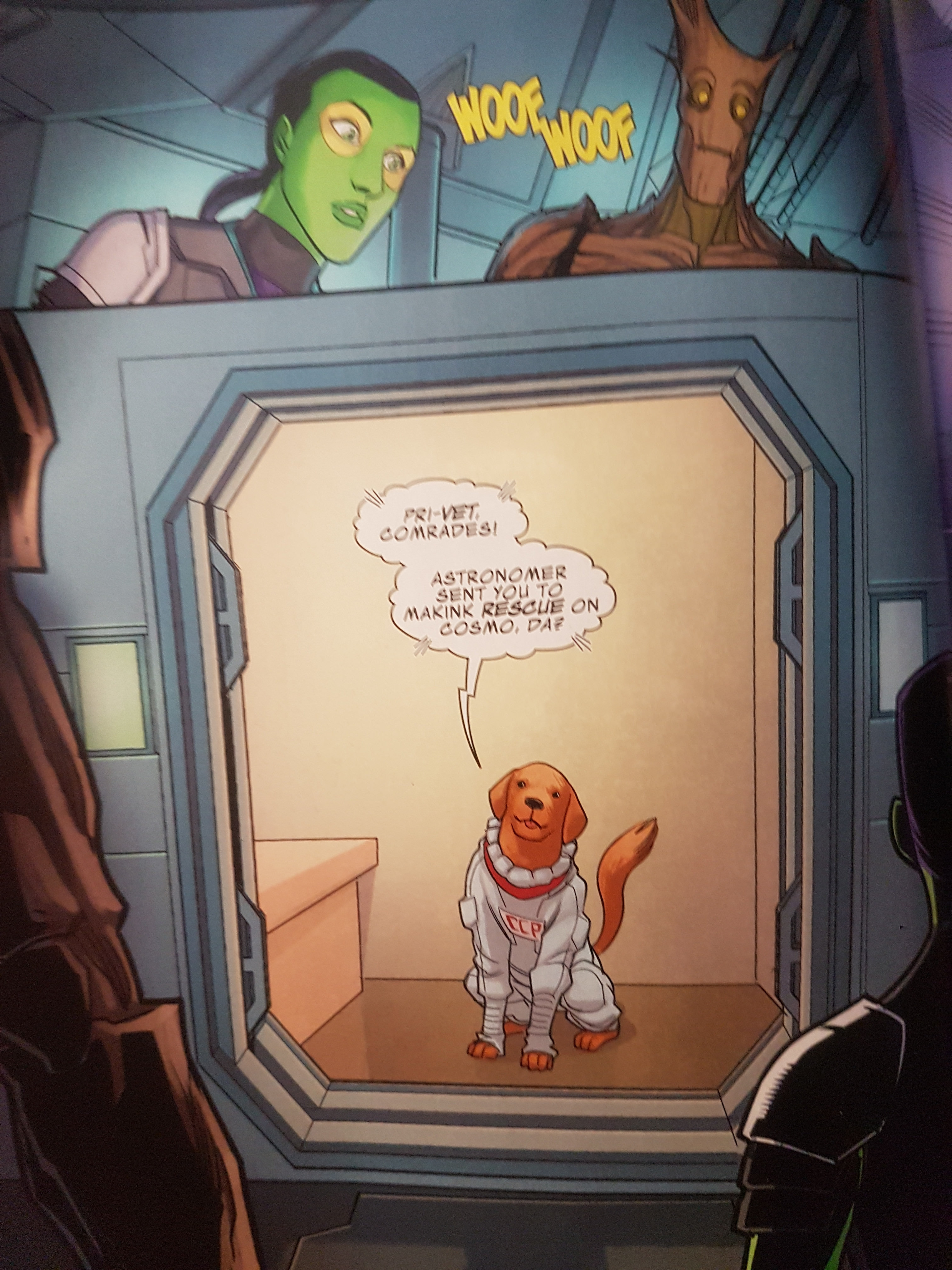 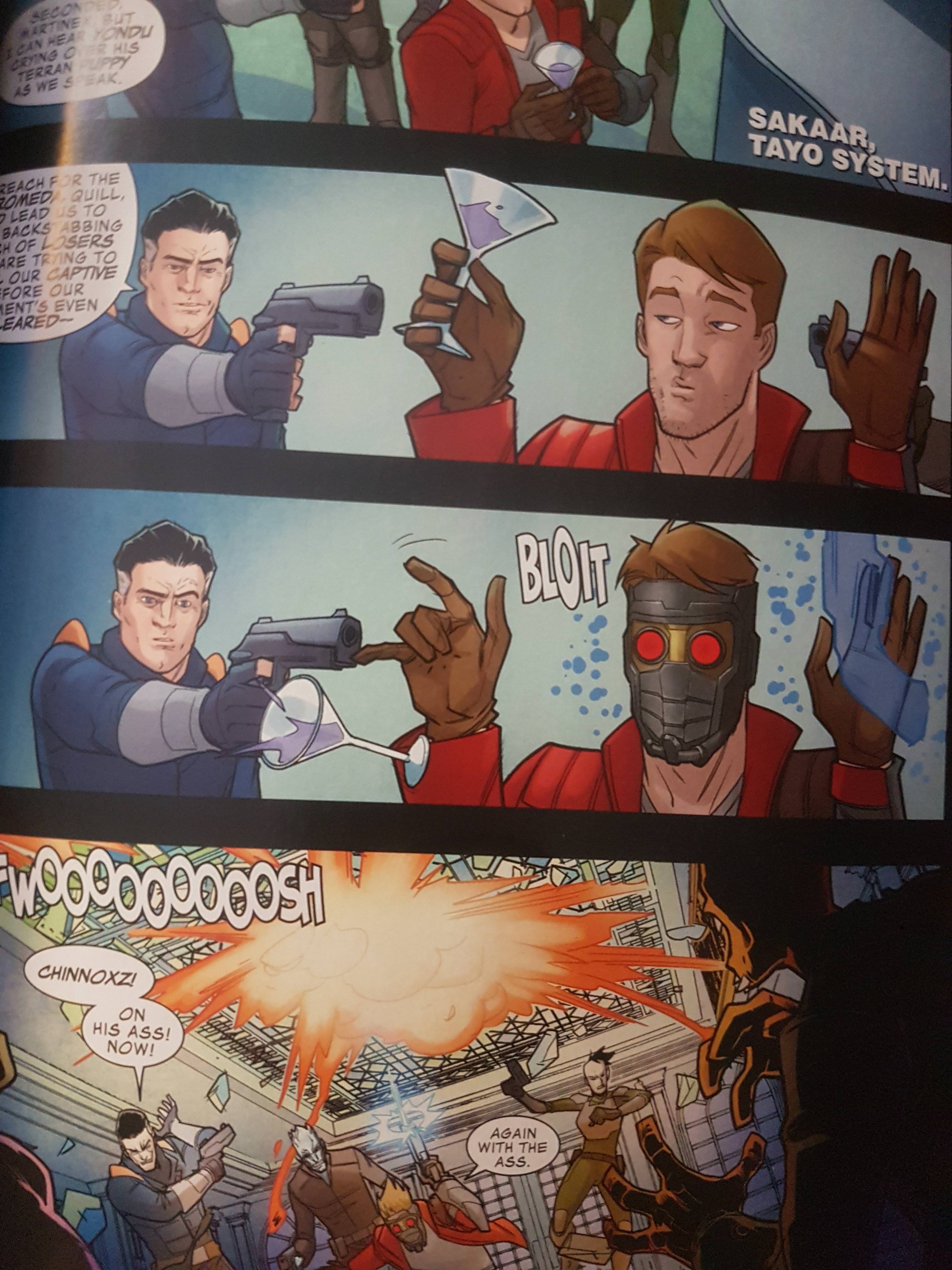 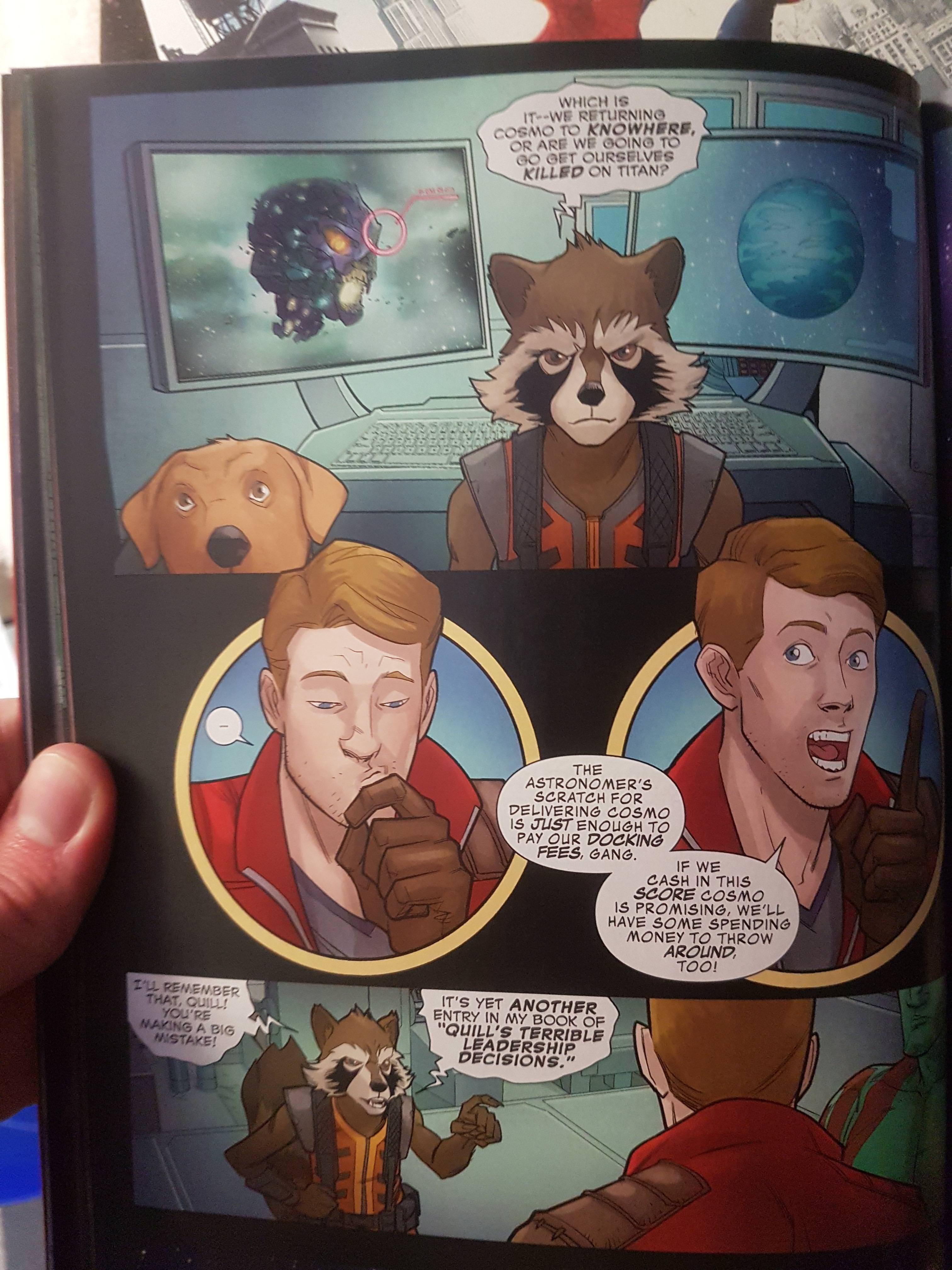 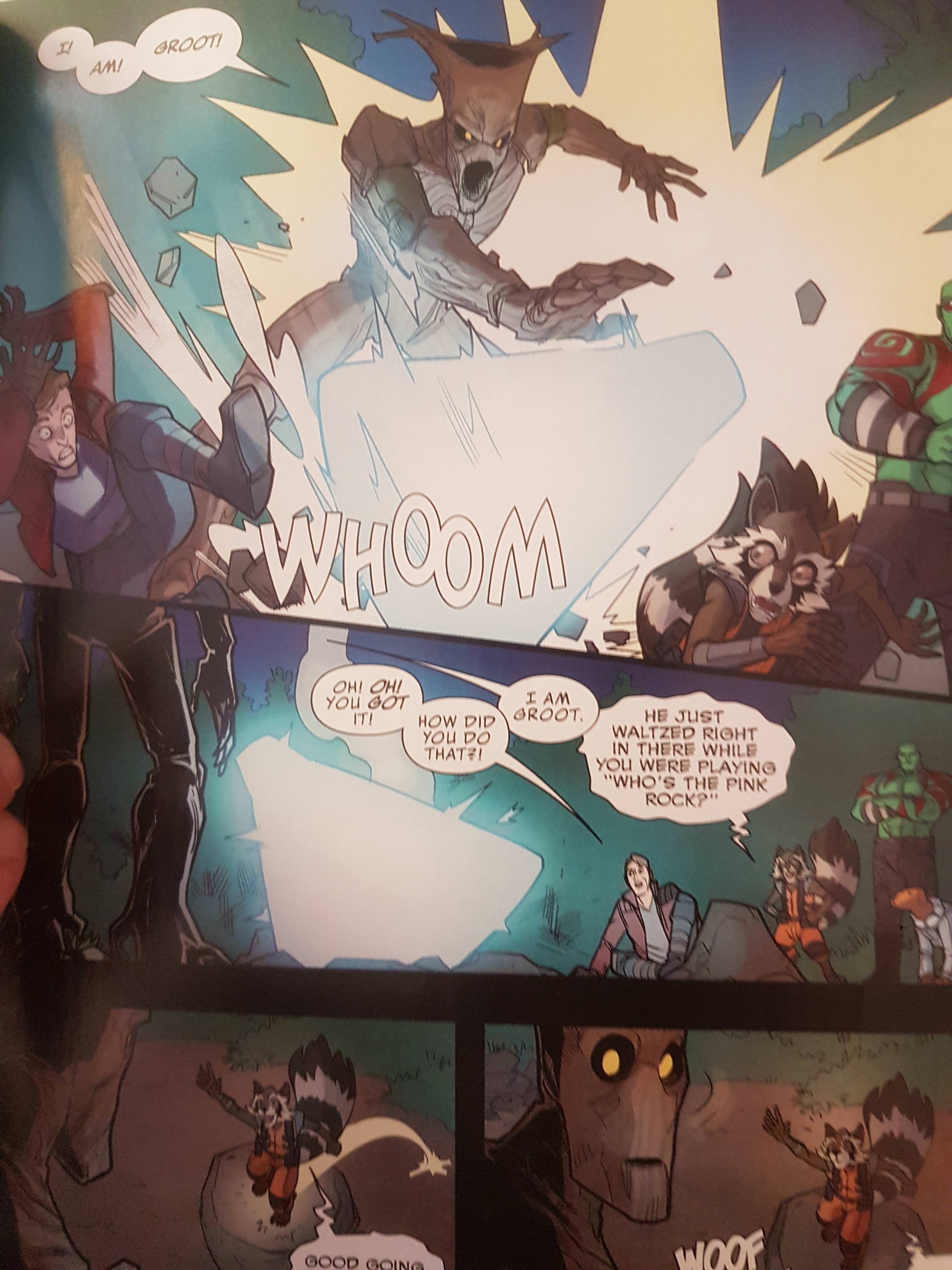 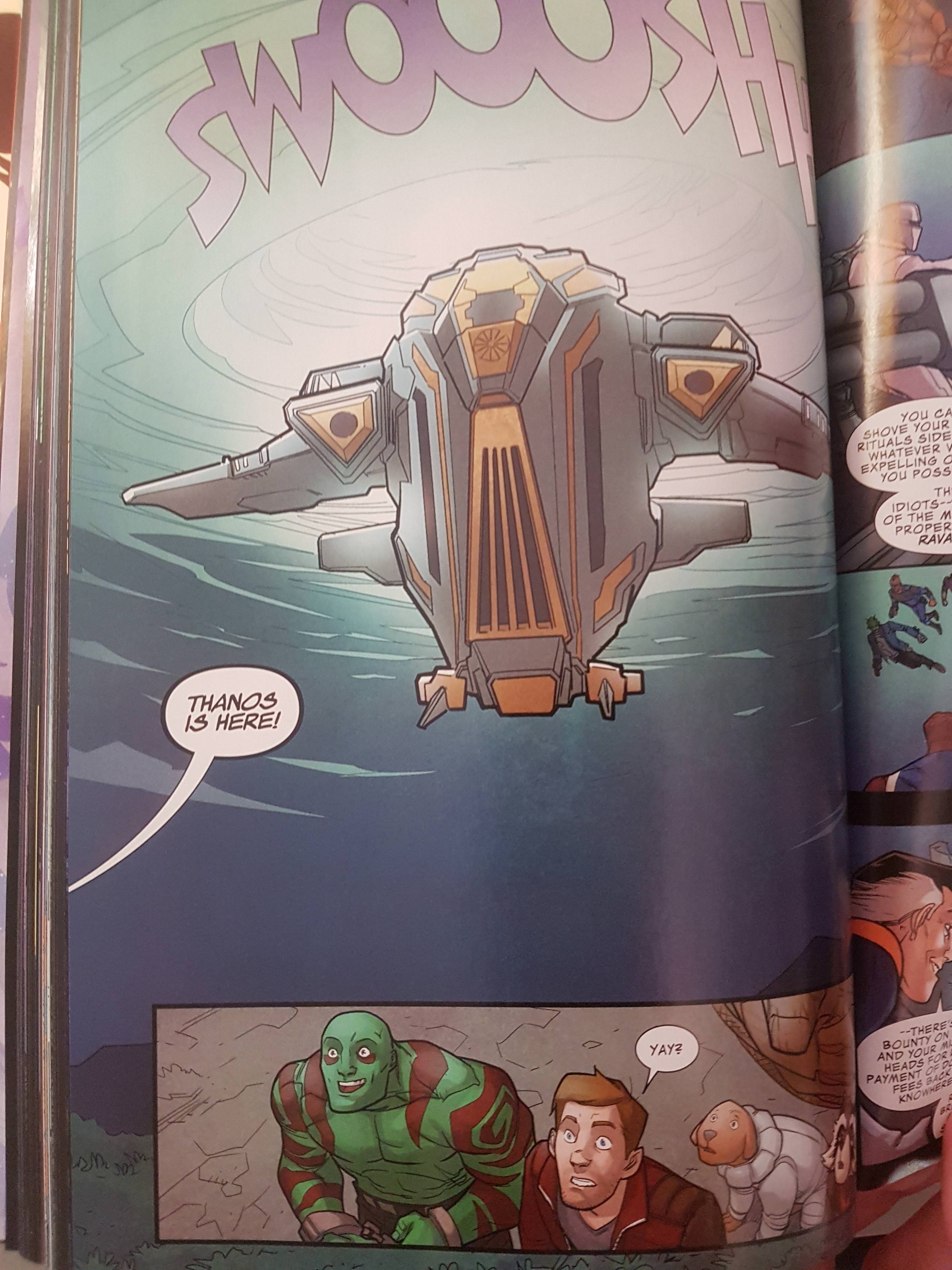 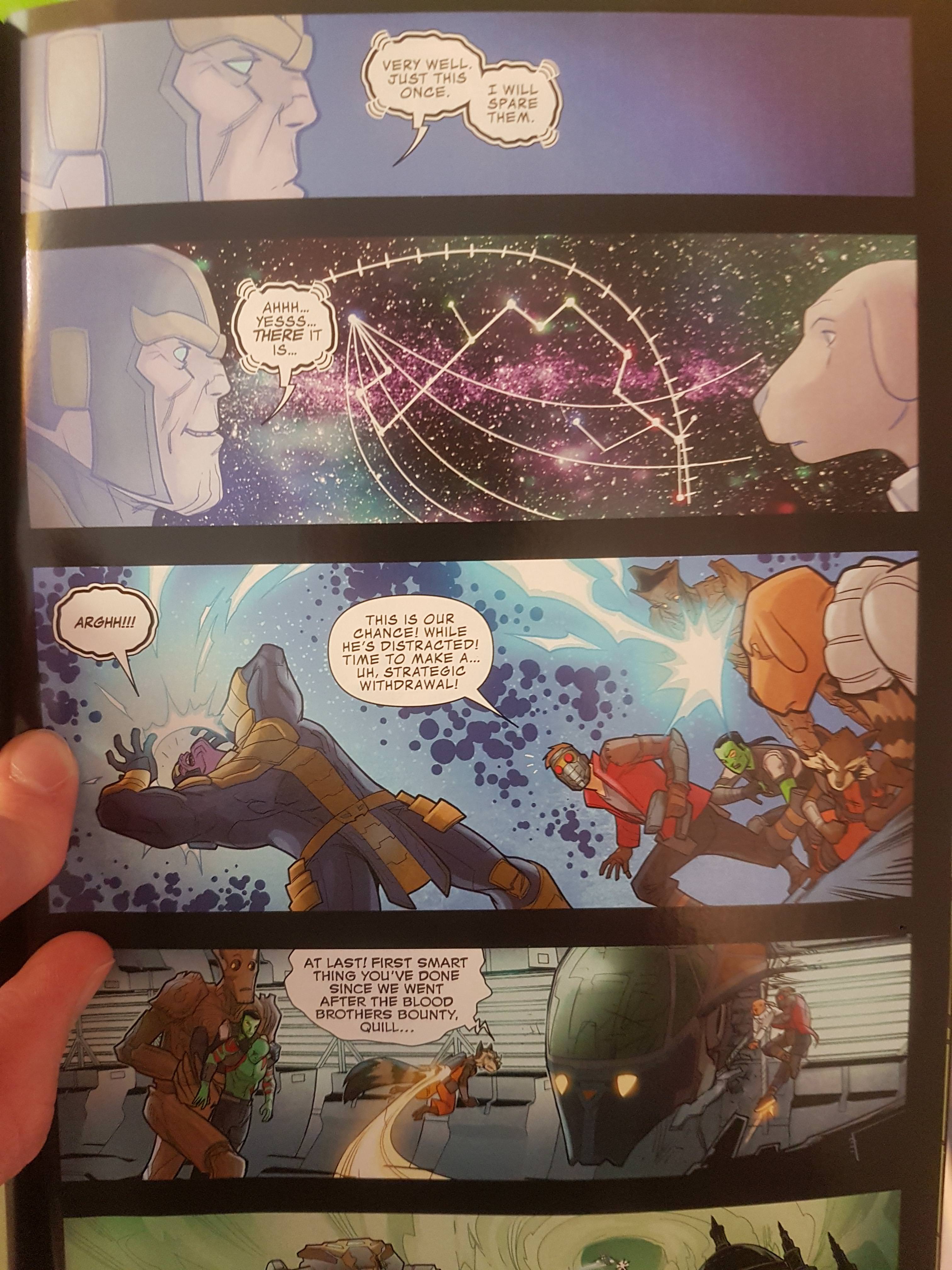 And here's some special concept art from the last few pages.

Cool variant cover which unfortunately wasn't used for this mini-collection 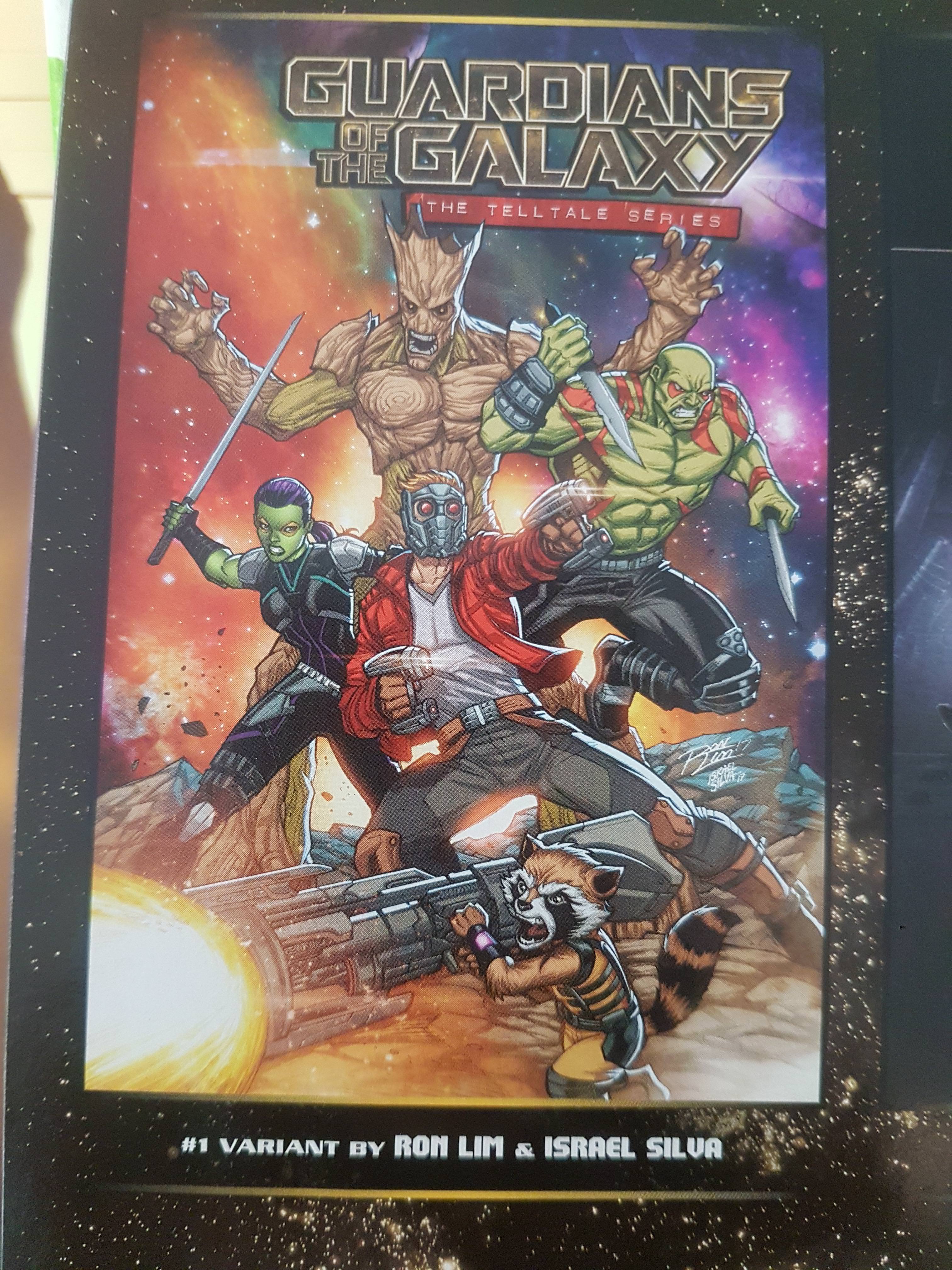 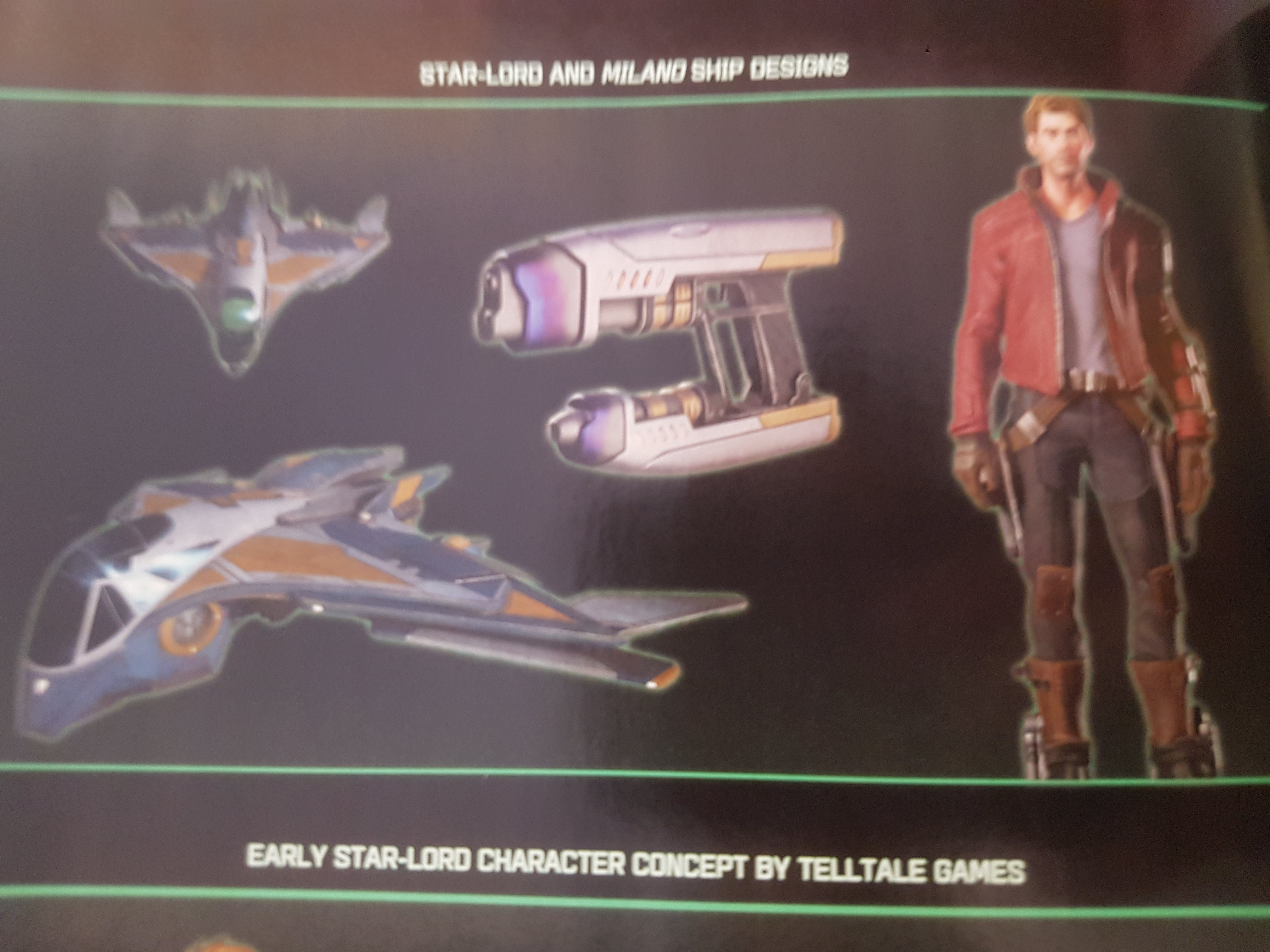 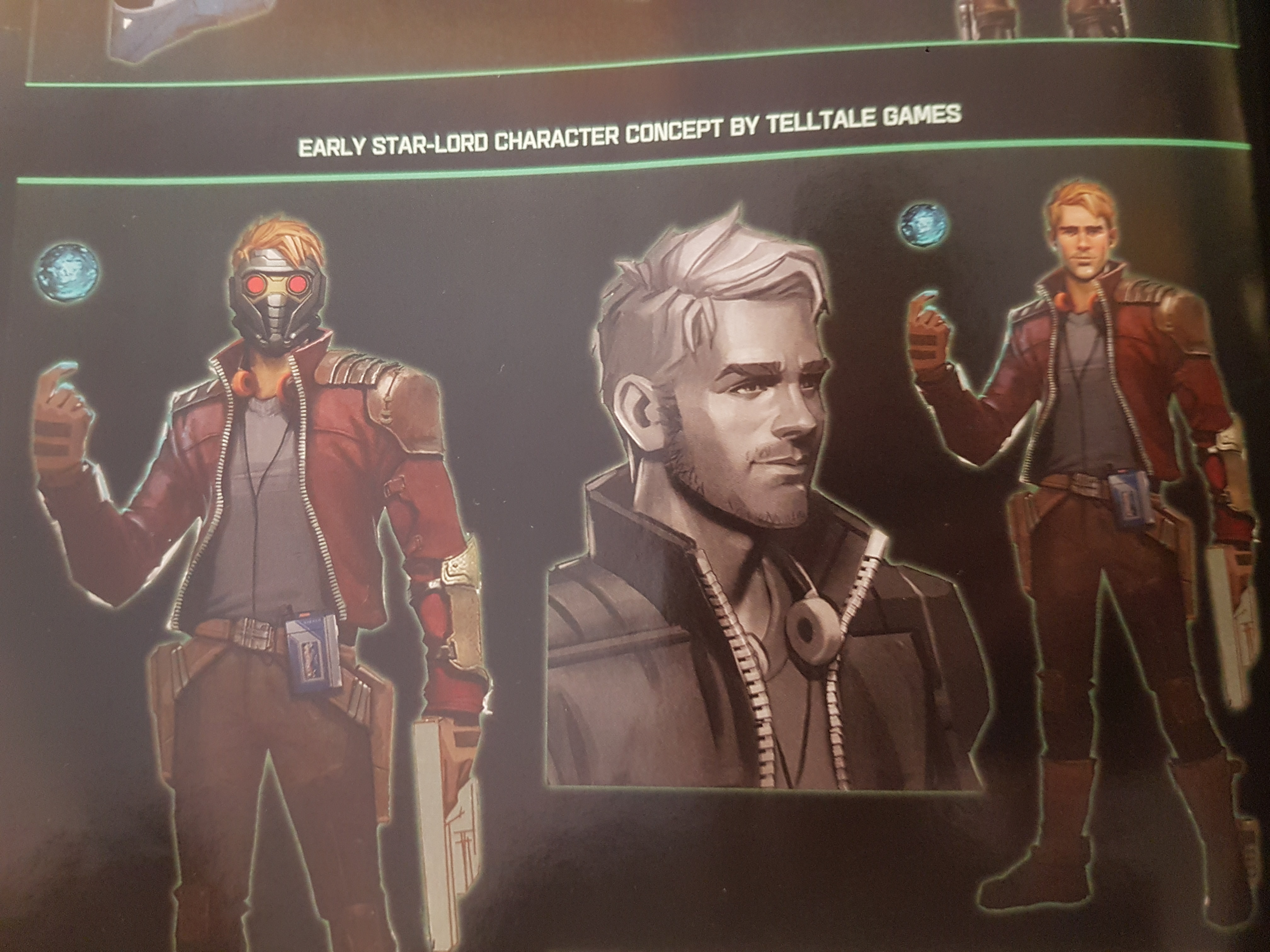 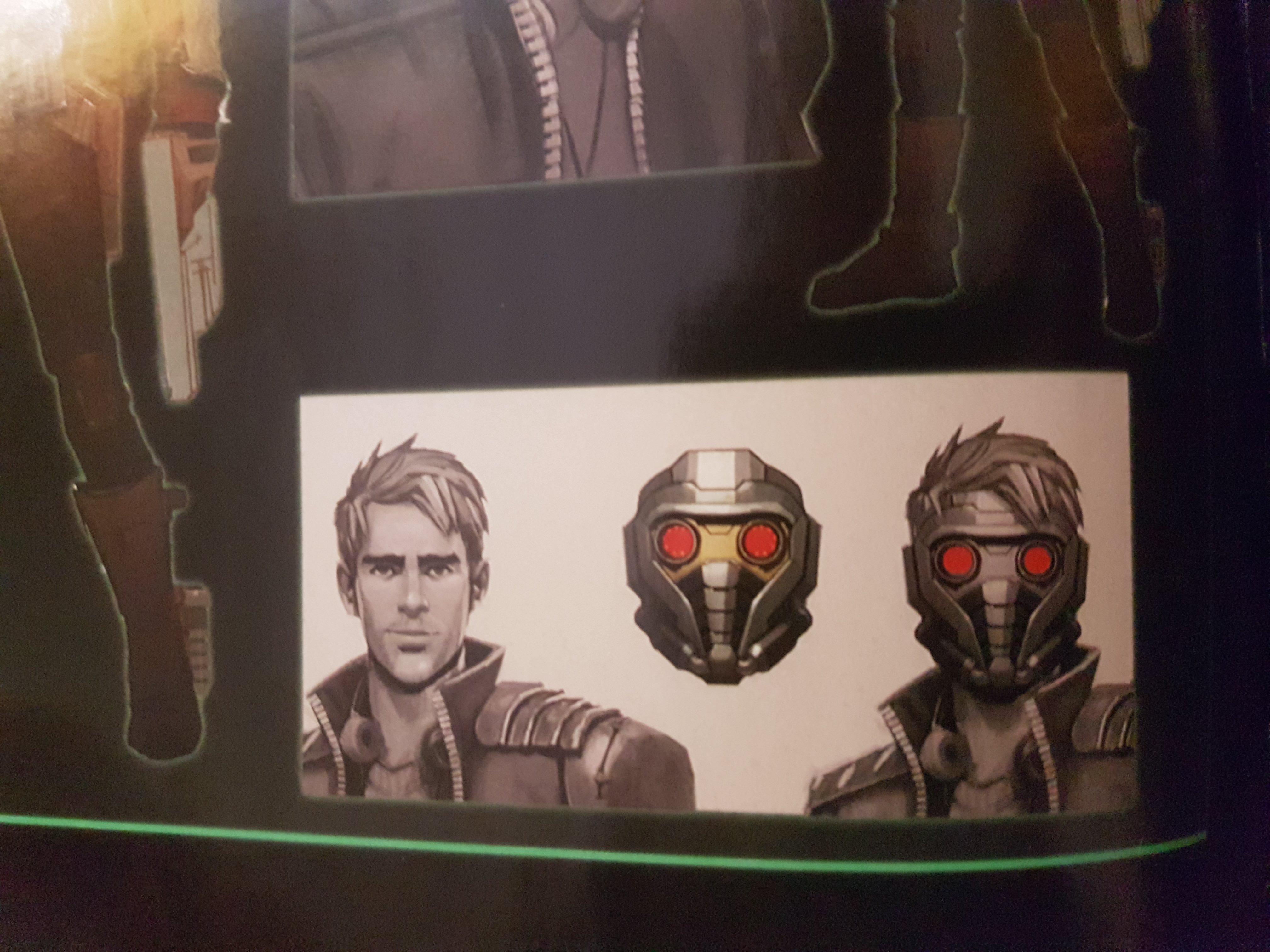 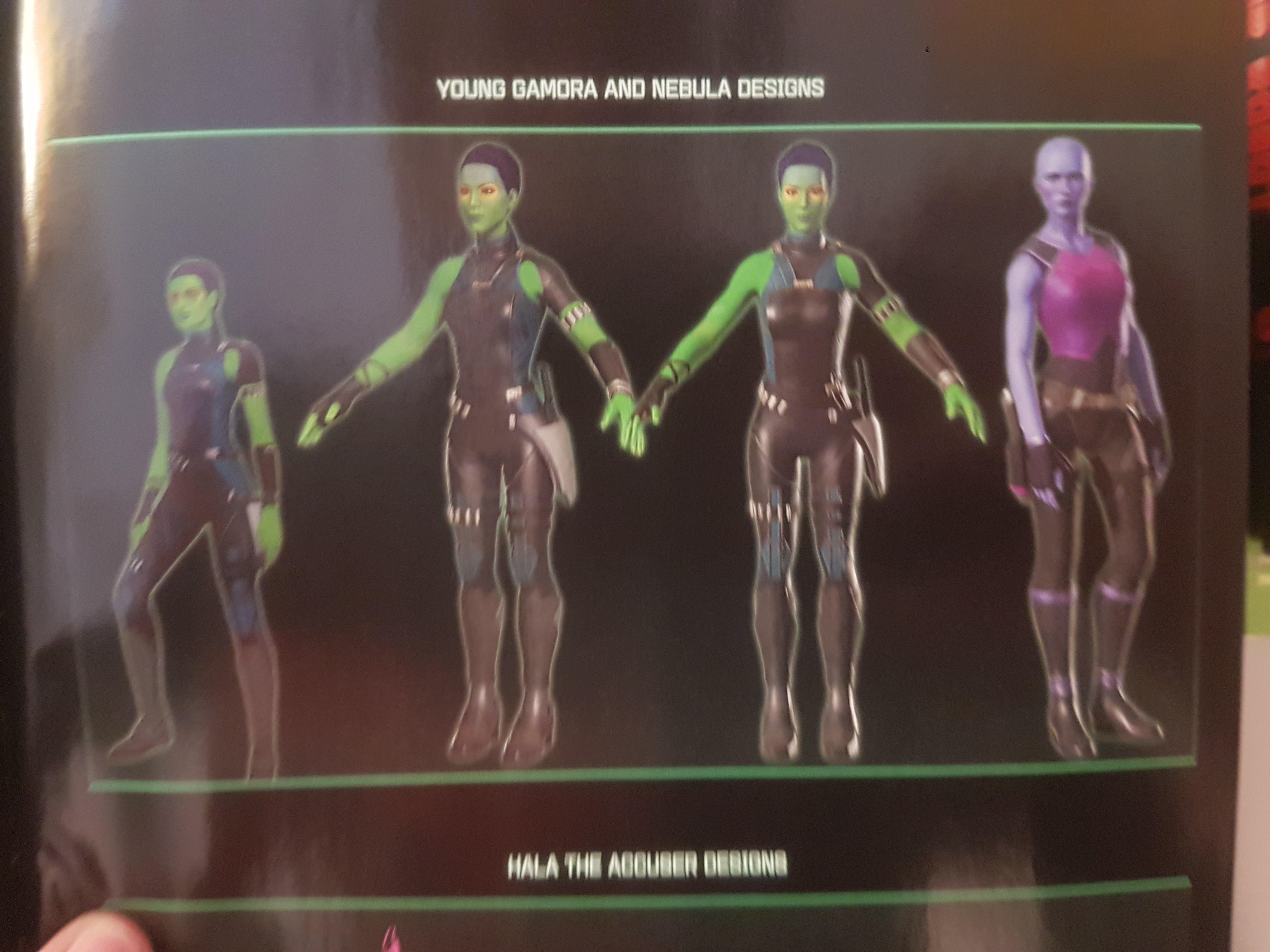 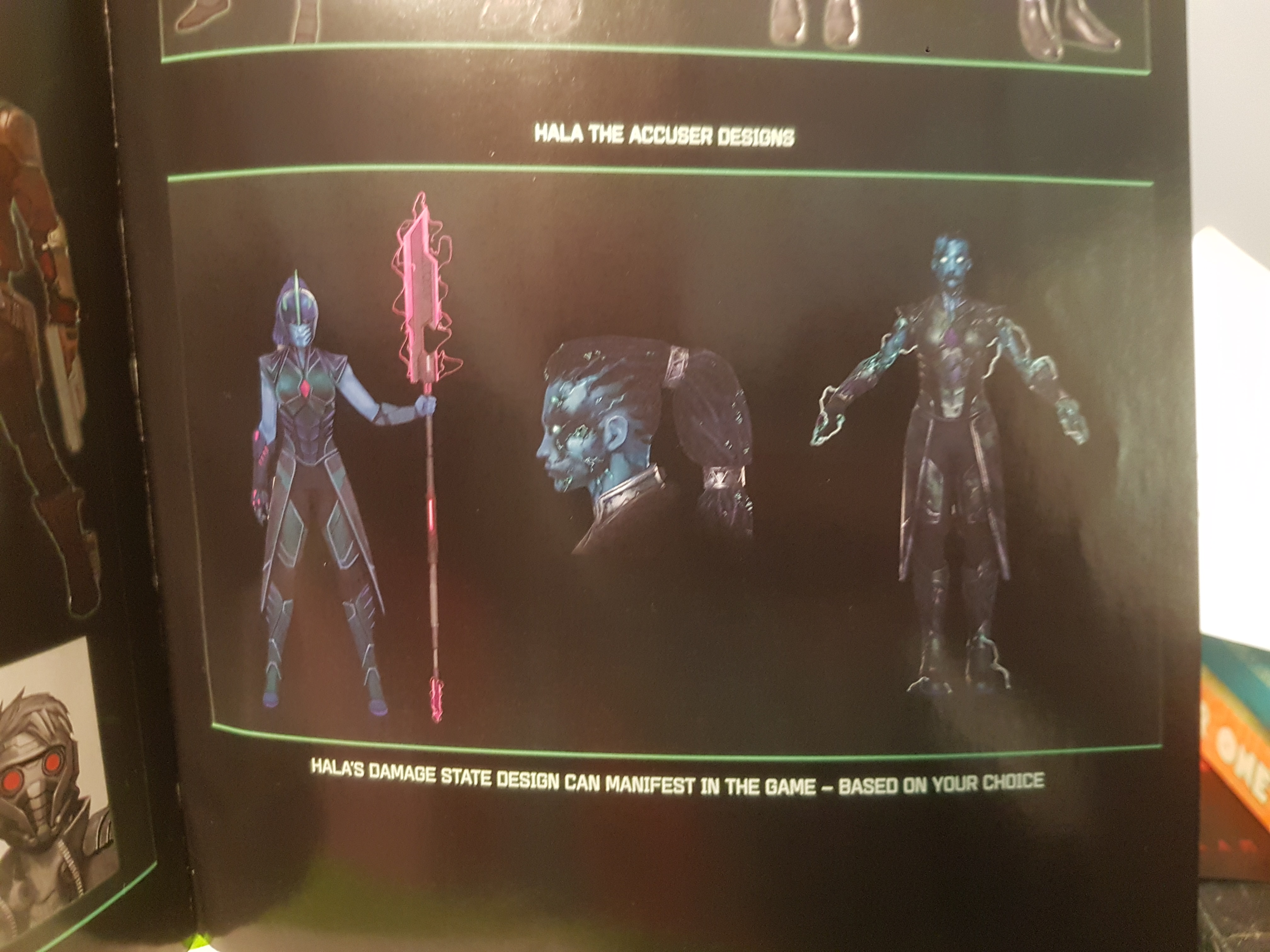 Someone used the wrong name here... 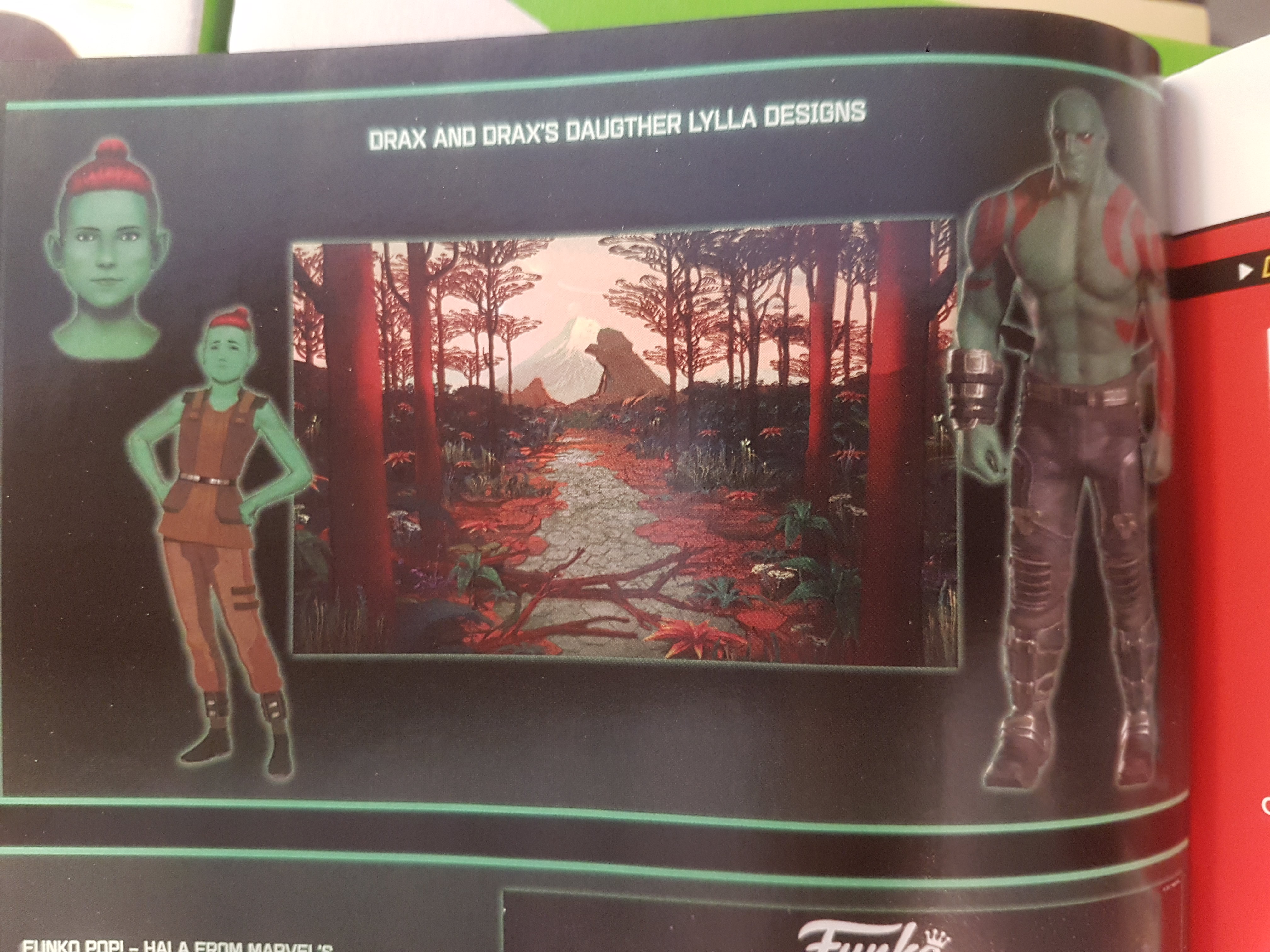 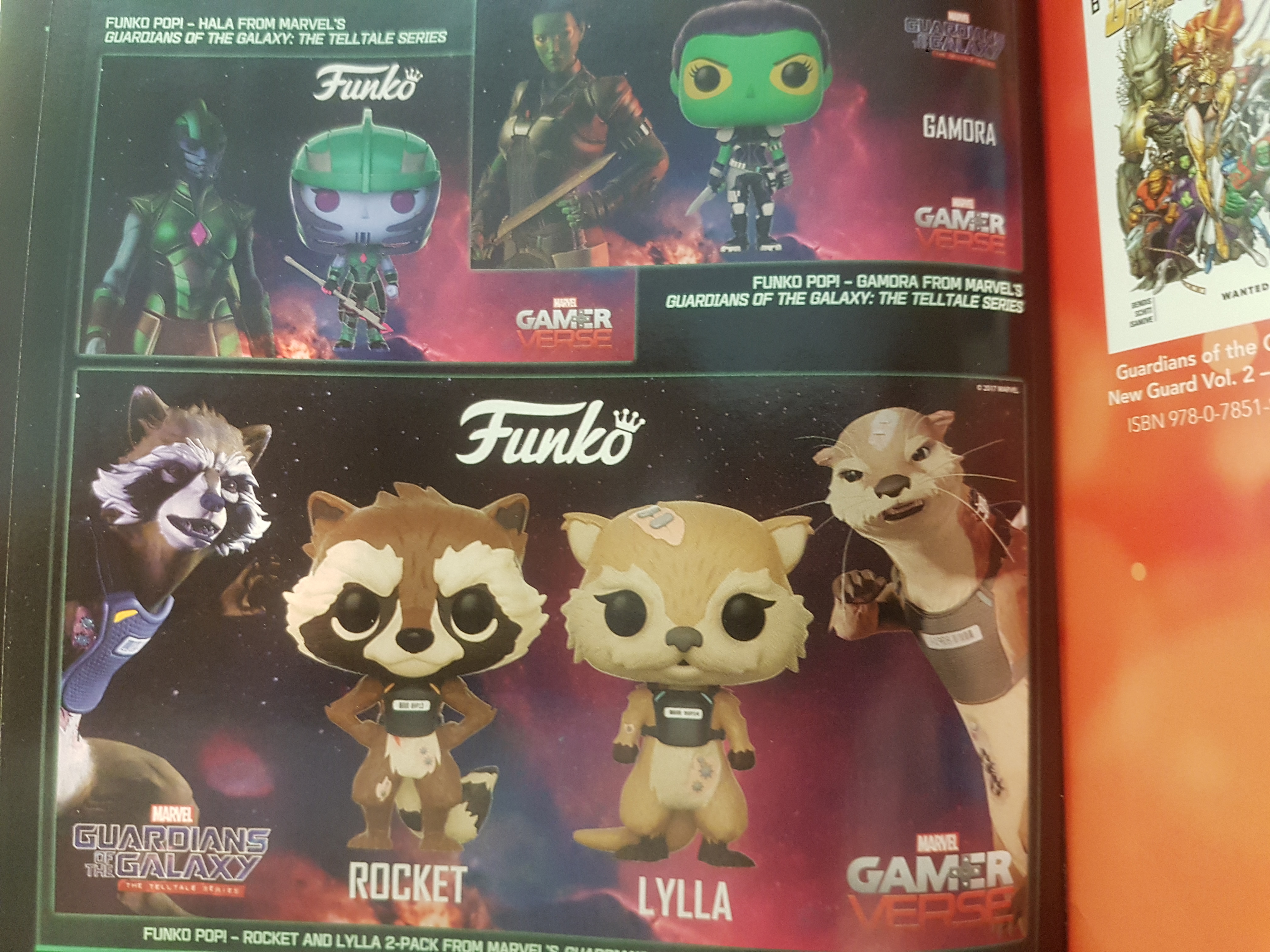