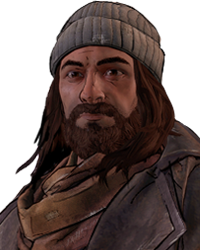 An RPG called The Waylanders planned for launch in mid 2020 on the crowdfunding platform Kickstarter at https://www.kickstarter.com/projects/432712414/the-waylanders-the-rpg-videogame will be worked on by Emily Grace Buck if it reaches $200,000 (at the moment it's around $65,000) in funding as one of the stretch goals describes and as is described in one of their update posts: https://www.kickstarter.com/projects/432712414/the-waylanders-the-rpg-videogame/posts/2320488.

Emily has worked as a narrative designer on both of Telltale's Batman games, Telltale's Guardians of the Galaxy series, The Walking Dead: Michonne and more recently, The Walking Dead: The Final Season. Her potential inclusion on the development of The Waylanders is part of why I think this is relevant here because she's previously worked at Telltale and supporting this game's development could also help secure her a job (on this game at least) while at the same time supporting the development of a game that may sound good and it may sound better if you liked the games she's worked on and knowing that she could contribute to this one too. She has tweeted about this a few times and this is one example:

The Waylanders RPG is described on both the Steam page and Kickstarter page as being "inspired by beloved classics such as Dragon Age: Origins, Neverwinter Nights 2 or Baldur's Gate" and the Kickstarter page goes into more detail, noting that "with 6 main classes, 30 advanced classes, and over 800 skills, you have many ways to create your hero." Another feature the game will have that seems unique is that "The Waylanders universe is based on the Celtic and Medieval eras... and allows you to travel between them!" The time travel feature apparently will relate to choice and consequence as they also say "your decisions may affect both eras". Of companions they say there are "8 companions + 4 reincarnations (whatever that means)" and that "each companion has three loyalty missions". In the comments section on their Kickstarter page the developers seem responsive to questions in there and they have responded to questions about a project they previously had problems with (AR-K) and they also provided more details about the game itself by saying that there will be a camp "when you'll have deep conversations with your companions" apparently "in a very similar way of Dragon Age: Origins" for some examples of their responsiveness to backers. Mike Laidlaw is also confirmed to be working on The Waylanders "as a high level Narrative and Creative Consultant" and he has worked at Bioware on the Dragon Age series including Dragon Age: Origins, Jade Empire and Mass Effect.

There are two "social stretch goals" that people can help with completing without paying anything and those are reaching 3000 followers on their Steam page here: https://store.steampowered.com/developer/gatostudio and reaching 2500 likes on their Facebook page here: https://www.facebook.com/WaylandersRPG/. These two goals unlock a new location in the game and an extended soundtrack, respectively, and so far they could use help with completion since at the moment they're on 288/3000 Steam followers and 802/2500 Facebook likes with just over two weeks to go (ending on 16th of November).

I'm not sure if there are any rules against posts that seem very advert-like as this one might look like since I haven't seen any clearly saying this kind of post isn't allowed but I could be mistaken. I thought that since this is a bit Telltale related by potentially involving Emily Grace Buck (previously of Telltale) and also being inspired by past well known and well received story focused games and Telltale's games are known for a focus on story then this post and game could be relevant and interesting to the users of this forum and hopefully worth backing and supporting on Steam and Facebook if possible because this game will presumably also be story focused. This post could at least give people ideas on what games they could play if they're looking for more story focused games by looking at the 'inspirations' and the games Mike Laidlaw has worked on.

Edit: Emily has now been added to the team working on The Waylanders "even before reaching the $200,000 goal" since they have "reached an agreement" according to this update post on the Kickstarter page: https://www.kickstarter.com/projects/432712414/the-waylanders-the-rpg-videogame/posts/2337472. Emily and The Waylanders Twitter account have also tweeted on this topic: