Anyone think the Tech Demo footage sorta plays like Life is Strange? 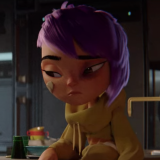 I was getting that sort of vibe from it when I saw the free roam camera there and the reticle gone.

For anyone who doesn't know what I mean: https://youtube.com/watch?v=--GQwims8Q8

I really like the new gameplay style and it's giving me faith for season four. I kinda hope there's more exploration and puzzles and stuff.