I still can't believe this is happening... 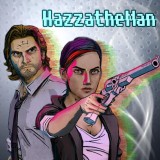 It is with a... heavy heart, that I write these words now.

Earlier today, as I was cycling home from work oblivious to what had been going on with TellTale recently, my best friend sent me a curious message (he is well aware of my love for The Wolf Among Us and TellTale games in general) It was an image of Kratos yelling at a computer monitor and underneath he had written "Must be your reaction to telltale games shutting down. Shit sucks"

As you can imagine, I stopped there and then at the side of the road only a minute away from my house, and searched for telltale online... And that's when I saw it, my worst fears realised. TellTale was indeed shutting down having laid off all but 25 of it's workforce.

My friend tried to cheer me up by saying that if the company went into administration then there was a glimmer of hope that it could be saved. But this is the real world, there is no Big Bad Wolf that can make this all ok with a swinging fist and an angry growl...

I don't want to write these things but I need to let it out. As some of you know, my first exposure to TWAU was not long after my 19th birthday in 2014; I had seen the first episode advertised the year before and didn't think it looked appealing, especially as I was eagerly awaiting the release of Ep.1 for TWD S2. It looked silly and I hardly read the blurb about it being based off of a comic book series that I had never heard of... So on that day in 2014, I downloaded the free trial of Ep.1 due mostly to TWD S2 Ep.3 not being out yet; and I started it up.

The first thing was that opening song against the pink/purple background, it starts out slow and then goes into something I could only describe as mystical, like that tune was drawing me in with the promise of fairytales and adventure. Then came the menu itself, and I saw our protagonist. Bigby Wolf, smoking and weaving through the people, his eyes turning yellow whenever he walked through the darkness. There and then I knew this was going to be good.

I start up the episode, and when Mr Toad's first words were "Oh shit!" I knew once again that I had missed out on a treat. I replayed that trial 3 times purely to beat the crap out of the Woodsman and marvel at the excessive violence, interesting characters and no doubt gripping story therein. I bought the season pass that same night and downloaded the episodes rapid.

At the time Ep.3 was out, but it was the wait for Eps 4 and 5 that were the most joyful. Talking incessantly with my friends about how great the game was and showing it off to the friend in question above, who took an instant liking to the lore and universe of Fables...

Ep.5 came and went, and then came down to a fun decision: buying all of the Volumes of the Fables comics, spin-offs included, and joining this forum. To this day, much to the chagrin of @CoolGuyJ I'm sure, I still have not read all of them. But they remain in perfect dust free condition in the cupboard by my bed, and every now and then I read through the main series to get a reminder of the universe (and to rekindle my gleeful enjoyment of watching the relationship between Bigby Wolf and Snow White play out on the pages. To this day they are still my favourite fantasy couple) Afterwards came the dive into writing fanfiction; and 4 years later I still have not finished my best project The Devil Among Us... Guess now I have more reason than ever to finish it.

Sorry to bore you with all this detail. But knowing that TWAU S2 may never be released saddens me more than never playing Eps 3 and 4 of TWD The Final Season.

I have made some great memories on this forum, and it's best to leave it that way. Here's to hoping for a miracle to happen just like in a good book. I'll stick around until the end and try to keep in touch with people... Who knows? Maybe our prayers will be answered.

It's been a great ride