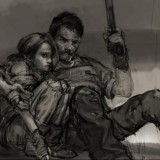 In issue 192 of Letter Hacks they put a question in where someone was asking about the timeline of TFS...…...and wow at least according to Kirkman it is a lot different than what most of us figured.

According to Kirkman TFS takes place after the Whisperer War but before the introduction of the commonwealth and that Clementine is roughly the same age as Carl (he said maybe a year older).

I think Telltale stated that Clem was 17 in season 4 but there is no way that she could be that old if the game took place on the timeline Kirkman said it did. Carl is only about 13/14 currently in the comic. The timeline especially gets weird when we start looking at AJ. AJ would only be about two or three according to what Kirkman said about the timeline

Now of course this really doesn't matter because I seriously doubt Kirkman or Skybound plans on doing anything with Clementine in the future but I think it makes it even more obvious that there never was much dialogue between Kirkman and Telltale. He basically just let them tell whatever story they wanted to.

I think if Kirkman lets another series take place within the comic universe of TWD he needs to have more dialogue with the developers during the development process than what there seemed to be during the Telltale series. Because even though 'technically' this series was intended to be taking place in the same universe as the comic in reality though it was a completely separate story filled with a lot of its own world building. And the Telltale team often said one thing about it while the person who made the Walking Dead universe says something entirely different about the video game series.