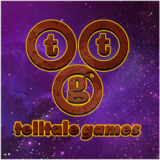 puzzlebox Telltale Alumni
June 2011 edited January 2012 in Nelson Tethers: Puzzle Agent
So we finally return to the crazy creepy town of Scoggins for a second helping of nuts!