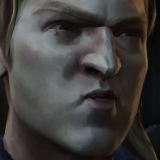 ...Auntie Greenleaf's long lost daughter?
It says in Greenleaf's biography that she got separated from her young daughter a long time ago when the Fables had to move to the real world, and she's been grieving ever since. They have the same eye color,big eyes, facial structure,freckles, distinctive cheekbones ,and natural black hair judging by the eyebrows.

Maybe she turned evil after being left behind in the corrupted Fable world?

Credits go to sSOPHOo for noticing!