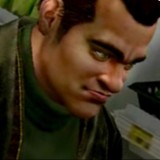 1.deadrising 1 not only does this game have what? 6 or 7 endings? It also has the most common ending ending A with this you beat the game and unlock overtime mode where you stay in the 'mall' longer than planned

2.the forest at the end of the forest after fighting the AWESOME boss you revive your dead son with this machine and you need a live sacrifice so you use this lazer that destroys a plane and there's the sacrifice...let's skip to one year later where you become even more famous! You and your twitchy son are on the stage and crap and GUESS WHAT YOUR SON DIES AGAIN CAUSE THIS MONSTER WHOM IS ALSO THE FINAL BOSS COME OUT OF HIS MOUTH!

4.fallout 3 your father sacrifices himself for the greater good oh and you also.