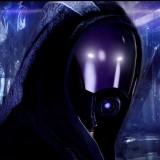 To celebrate the Halloween season, I thought I'd start a thread where you can discuss horror films whether it includes listing your favorites, listing your least favorites, or any potential upcoming ones that you're looking forward to. Go nuts.