Was Carver right, and is AJ doomed to become him? 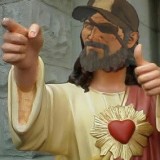 So, as I alluded to in my previous thread about the bridge decision and how players were reacting to it there's a massive elephant in the room.

Quick clarifications about the thread title: "right" has nothing to do with morality in this context, I'm gonna stick to his claims about the characters, not his politics or actions. Much more clarity in the former. And "AJ doomed to become him" is dependent on determinant choices as we'll get into, so doomed might be a bit overdramatic.

So, with the bridge situation in season 4... If the player trusted AJ earlier in the episode he shoots and kills Tenn to get Louis/Violet out of harm's way. I'm going to forgo the morality discussion to be had with that since I already made a thread on it.
What we're gonna focus on is the why. Once V/L start berating AJ for it he responds with

I didn't want to shoot him! He was my first real friend. But he was messing up, again. Just like when he got Mitch killed.

And the community seems to echo this idea. Considering Tenn a liability and thus Tenn is causing, or even deserving from the more extreme players, his death.
A quick distinction before going forward: Tenn's death at the hands of AJ is an active killing, not a passive one as with Ben or Sarah. Ben and Sarah were allowed or left to die through inaction. Tenn was killed with deliberate action.
The idea of killing liabilities through active means is not unique to AJ. It's appeared before in The Governor (the Free Comic Day issue in particular), The Whispers and our old friend William Carver. (It's worth noting that all 3 of these are very violent antagonists. Oh dear.) Now Carver is where it gets particularly interesting since he has a history with Clem/the player and is possibly AJs father (yeah, yeah, that's a whole other can of worms but the threat of possibility is there and worth noting).

During season 2 episode 3 he throws Reggie off of a roof killing him. He later addresses this to Clem/the player in his office.

You might not believe this after what happened earlier, but... I liked Reggie. He was a funny guy. He kept things light. You need folks like that. It's easy to let depression sink in during times like this. But he was weak. And I don't mean just cause he was maimed, that wasn't his problem. He was weak of will. Weak of character. And we can't have that around here... not anymore. Not with what we got at steak.
Listen Clementine, it ain't murder. You see Reggie put us at risk with his incompetence. He's had a string of screw-ups lately. Killing one in order to save many is part of survival. It's one of the tough decisions that a weaker person couldn't make. It's why it falls to people like us to lead them to safety. Do you understand? Well, I wish it was different, I do. But they are weak and we are strong. That's why it's our responsibility to shepherd the flock... to keep them safe. It's their nature to follow... not to lead.

And this is where you start to see similarities.

I didn't want to shoot him! He was my first real friend.
You might not believe this after what happened earlier, but... I liked Reggie. He was a funny guy.

Both say they didn't wish they had to, but felt they had to and were pushed into it by their ideology.

But he was messing up, again. Just like when he got Mitch killed.
You see Reggie put us at risk with his incompetence. He's had a string of screw-ups lately.

And both try to justify it, shift blame to the victim.

But it's after that part in Carver's speech where it starts getting... weird.
After the insinuation from "people like us" Clem/the player can tell him off

I'm not like you
I know it when I see it. And we're more alike than you think. In fact I think you realize it, but you're not comfortable with it yet.

Again this is said to the player as well as Clem. And given that many of those players would go on to defend their decision and try and justify AJ's actions.... he was right about those players. Usually a villain talking about "We're not so different" is hackney and cliched. There's little substance to it and the writing just wants you to think it's smart. But it seems that over time for a lot of players Carver turned out to be right without them even realizing it.

His speech takes another turn right after.

There's no way you could've lasted this long otherwise. I realized it back in that cabin. You were scared... but you looked me straight in the eye. Kept your nerve. That's what we need if we're gonna get through this. The next generation has to be stronger than the last to... lead us out of this. Kids like you, raised the right way. The way my child'll be raised.

I stand by the idea that a theme of season 4 given its ending is the durability of the remaining survivors, namely the kids. They faced the end of the world and a seemingly insurmountable enemy and won. Clem faced a trial very near to what Lee did and she survived. This generation is stronger than the last. The ending is hopeful. Even in the most extreme of circumstances most of the kids survived, so maybe they do stand a chance of bringing humanity out of the walker age. In other words; Carver was right.

But it's those last 2 lines that get real troubling real quick.

Kids like you, raised the right way. The way my child'll be raised.

Clem has a massive influence on AJ. She's one of, if not the only, person he's known most of his developed life. The game constantly has you teaching and guiding him. And if the player follows Carver's politics of leadership through strength, execution of liabilities, punishment by brutality, eye for an eye justice, and manipulation AJ will follow suit. But it gets even worse than that.
AJ will shoot Tenn of his own accord. Independent of what you've told him up until then aside from weather you say trust him or not. Even the most kind hearted playthrough where you don't trust him still has him aiming his gun and considering it.
This suggests that Carver's ideology doesn't need to be taught to him; at least some of it is in his nature. This means that just avoiding the pitfalls of Carver's ideas isn't enough. You have to actively reject and fight against them through mercy, optimism, and strives for peace where you can and should. At any instance where a heavy hand is needed you must clearly explain why, establish it was the exception and not the rule. You have to be better or Carver will be right.

So with the meat and bones over I'd like to share my experience with the matter as, in retrospect, I nearly fell into this. It's pretty long so I'm gonna tuck it into a spoiler tag.

I touched on it a bit in my thread about the realization I had after episode 3 but here's the full version: Episode 1 I played it cool. Be nice to everyone, and look for the peaceful route when conflict did arise. Abel wants food? Eh, it's 1 bag. Let him have it. Marlon surrenders? Eh, maybe exile would be good- OH SHIT. Nevermind I guess. I carried this over to where I could in episode 2. AJ killed someone? Explain that it was wrong, why it was wrong and how he should make up for it. They voted us out? Respect the process and leave peacefully. But once the conflict started getting messier and it was clear there was a war on the horizon I started getting much more hardline. We couldn't win a war of attrition so we'd have to hit hard and fast. Any means necessary. Lilly's trying to trick me? Shoot her. There's a leadership hole? Push Violet to lead. She's a fighter and can unify everyone behind her to fight too. But it's the episode's final decision that nearly sealed my fate. I chose to save Louis because he was a wreck and Violet was capable. I don't mean that I thought she was tough enough to handle capture but because it'd leave another hole in the leadership. One that Louis couldn't fill... but I could. And from there I'd be completely free to peruse the warpath. The only way out was through and we needed someone to get us through. We needed a leader who was... well... strong. It wasn't until writing this thread that I realized just how much like Carver that thought process was. So, come episode 3 I follow through on that idea. I still try to stay grounded where I can. Only hurt Abel after giving him a fair chance and then mercy kill him. Avoid killing anyone on the boat when sneaking in. Don't instigate the conflict, chose my battles. Head-on fights with the bulk of Lilly's forces is a fool's errand, so don't bother with them. Go for what's enabling or driving them. Take out the leadership, take out the boat and they'll be scattered and broken. Get that done at any cost. Now I couldn't avoid all conflict. When it came to me I leaned into it. I beat up Violet and Minnie without so much as a second thought, I let AJ tear that woman's ear off and felt almost proud when Louis killed her even though it cleared scared him. And I told AJ to shoot Lilly. Only in the wait between episodes 3 and 4 did I realize how far I'd gone off the deep end. Maybe I always knew it but with the war over, as far as I was concerned, I had my ends and was left looking back at the means. What stood out to me the most at first and what I talked about in the thread mentioned at the start of this massive paragraph was that I'd dragged the other kids into the fighting. Lilly was trying to turn them into child soldiers and I wound up doing the same thing, just for the opposite side. This is what snapped me out of it. Come episode 4 I did a proper 180 and tried to pick up the pieces. I instantly forgave Violet for actions previously, I tried my damndest to reconcile with James, explain why an exception should've been made for killing Lilly, and felt relived when Louis was able to cope quite well with having killed someone. But the one thing that saved it all for me was that I did not trust AJ to make the calls. I almost did. As much as I want to say it was due to some grandiose change of heart it was actually because I figured that because of Lilly I was sending mixed messages and still needed to give it more time. I think that saved it for me. Only in retrospect did I realize how close to the edge I'd come. And how when pushed I found myself falling right into the mindset of 2 villains without even realizing it and that terrifies me.