Do you pity Crane? 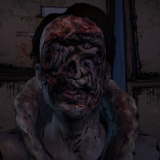 Clemenem
June 2018 in The Wolf Among Us

While he is a scumbag and a total creep seeing him break down and confess his sick love in front of Snow is sad in a pathetic kind of way and how desperate he is to try to prove his innocence is pretty pitiful. The fact that he inspires nothing but hate and annoyance from anyone who comes into contact with him not to mention that he never had a chance with Snow makes me realize he's a small fish compared to the far more threatening, Tweedles, Bloody Mary and Crooked Man.