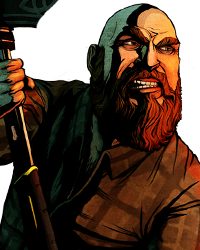 Hey guys,On this post I will do a compilation of my theories and thoughts about the possible players on Season two of our game.
Next season will be as we all know,the cliffchanger for House Forrester,the moment the fighting is carry back to the Whitehills and this can only be possible with the cession of troops from Noble Houses that are still on their feet after the War of the Five Kings.

Also I must say that the aid that these houses can offer can be either nominally,Remember Mira's letter possing as Maergary Tyrell,or directly similar to the Glenmore Elite Guard, is our direct reference.On this category can play a role Great Houses as well as minor ones.

So Here my theories:

1.Remaining Houses of the Wolfswood.A possible plot for season two could be that the Lord of Ironrath goes through the Wolfswood on his post recovery at season two.There Rodrik/Asher could meet surviving members of these Houses(Either Old Forrester allies or other Bannermen to House Glover),Telltale could introduce here their "little backstory" and how they live on the actuality(Hiding on the forest as trackers,hunters since their strongholds were taking from them by the Bolton's).This quest could end with the objective of helping House Glover,House Forrester overlords in exchange of later help retaking Ironrath from the Whitehills.The situation would be a little more complicated than the books since there is no Stannis' plot on here and the Bolton's are apparently the ones that wipe out House Greyjoy from Deepwood Motte,but I trust telltale can find a link a bridge to connect all the storyline.

2.House Glenmore.Our beloved Lord Glenmore has still much to say on this story.Either if you follow Rodrik's path or not,the alliance with the Glenmores can be renegotiate.House Glenmore is one of the Houses of the North that has suffered less after the Red Wedding on the terms of troops and power(possibly because they are bannermen to House Ryswell,pro-Boltons of their influence on The Reach).This could be a chance to also clarify the numerous reference s to House Glenmore's cadet Branches(North,Riverlands,Reach) which could mean a strong asset to the Forresters.
The Lord or The Sentinel Traitor could pay Lord Glenmore a visit on Rillwater Crossing to put the affairs in order.

3.Nominally(House Tarwick).Let me explain this further,Lord Garibald Tarwick was an experienced courtier in King's Landing and a possible suitor to Sera back on Season one.There was a decision that concerned this Lord which meant to reveal Sera's parentage to him or not.The thing is that Garibald is the link to House Forrester influence in King's Landing being a way to live Mira's plot not playing as her plus the inflation the lordly position gives the players.I theorised from him before(At the end of the post I'll put the links) of being Westerlander lord which could mean on the gameplay the possible decision of forcing a letter,decree of a certain order from House Lannister to cut the Ironwood business from House Whitehill's hands,perhaps even tricking Cersei(convincing him that Lord Tarwick as a Bannermen to the Lannisters can organise a better control of the activity, helping slowly House Forrester retake control of their whole House.Lord Garibald Tarwick is that character neutral at first on the conflict but can emphasize with the Forresters cause seeing it just.The little interactions of the character with the "link" can be switched either with Tom or Mira depending on whom is alive.

4.House Brandfield.This is other interesting possibility,House Brandfield was destroyed on Robert's Rebellion long ago but the house remains alive thanks to the last member of it Malcolm Brandfield.Uncle Malcolm apart from having the "nominally" influence on House Targaryen (that would prove the difference in the long play).On his stance in Daernerys' court several decision s can be presented to restore the Branfields' power,forming an army on the road of season two(mercenaries, Unsullied) that can prove very useful to the final right of House Forrester.He could even marry(Unmarried) a member of an important family of Essos giving extra strength to the House.Malcolm's plot can be one of the main keys.

5.House Whitehill.I know,How would House Whitehill aid on it's own destruction?There are several wholes on their house as well as "weaken lidership" or "problem on the succession" depending on your choices back on episode 6.Either you kill Ludd or Gryff the interchangeable scenes on season two will change and perhaps will even prove a difference.The possible introduction of Whitehill family members,either Ebbert Whitehill(master at the Cidatel) or Tohrren Whitehill(less possible,cause can be Lord Whitehill on Season two).The untold Whitehill family conflict between its members could bring the downfall of the House on Season two.Ebbert could bring Anti-Whitehill influence on the Cidatel and could have an interesting plot.
If not Gwyn Whitehill(doesn't depend on Asher route or not) will be put in contact with the Lord to put an end to her own house tyranny.

6.Random House.This could be Telltale's surprise for season two,either a minor House we already know(House Warrick) or an encounter with other great House(see House Baratheon on the Wall-Gared's story,House Frey/Tully or even House Tyrell again).
There are lots of speculation on this point.I like the House Warrick theory(remember Britt the awhile who killed Gared's family?This is the way),We could be put on the role of a minor/mayor member of the House and see a perspective of Whitehill's rulership on the lands surrounding Nightlong.The abusive demainor of the ruling house could provoke the Warrick to switch sides and start backing the Forresters.Perhaps even a marriage between Ryon and a member of the house could be implemented to secure the alliance.The great House encounter is a very plausible one,I already explained on the House Tarwick category the contacts with House Lannister;But here I mean to focus on the others.
Perhaps a meeting with David or Stannis on the Wall could be possible,it's rather difficult of them to meet with a deserted of the Night's Watch,Plus Stannis' campaign on the North is not show canon.The House Frey/Tully one was proposed long ago on the community,I trust that Talia was the character to take the "job" hiding her identity manipulating an old Waleed Frey,On this line Riverland's occupation by the Blackfish could be introduced.
A House Martell one is nearly impossible but who knows...

Ideas on the comments!