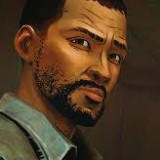 So Winter is finally here! Discuss away your thoughts and etc.