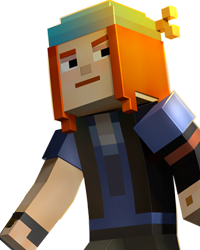 MCSMPetraRoleplayer
November 2017 in Guardians of the Galaxy

Now that seasons one over. Some of us want a season 2. Do you want a season 2? Why or why not? Not only that, but some ideas for season 2? Episode names for the season, And basically just say what you would do if you could make the whole series.
Me, Well i would want a season 2.
I overall enjoyed the first season. it was funny and just one of the best telltale games. The music was good and especially the mechanics. When you walk around and select things or people to interact with, you most of the time could use your jet boots and also call your friend AKA the guardians.
In season 1, i didn't see any relationship of crush or anything. I would like some romance to be mixed up, and actual good villains. The only part when the Kree was good was when Peter died. Same with good characters, but i think rocket could be the same. He's hilarious
Episode one! Evil Awakens
Episode two! Believe
Episode three! Loosing Hope
Episode four! New and Improved
Episode five! The end?