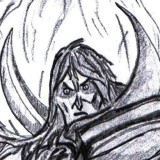 And Tiffani lied. Yes, I don't believe she did that. She had to lie in the last episode.
Joker has been playing mindgames since S1. Never trusted this guy.