There IS a Canon Ending to Season 2 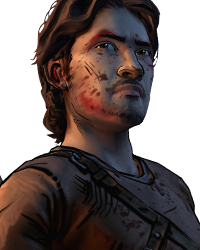 The answer is the trailer to Season 3. In the trailer, Clementine is shown with a missing finger. In Season 2, if you choose to end up alone with AJ, a flashback will show in Season 3. During the flashback, Clementine gets a car door smashed onto her finger, causing it to have to be removed.

Being alone with AJ is the ONLY player option that will trigger this flashback in Season 3. Even though it does not matter as in to who dies in the end of Season 2 whether it be Kenny or Jane, you must abandon whoever survived in order to be alone with AJ.

Now I know people might argue that the trailer isn’t really canon to Season 3 because 1: player choices in the end are what make canon in the game and it is ultimately up to the player to choose what happens and 2: Javier has no facial hair in the trailer, but in the actual game, he has had facial hair the whole time he’s been with Clementine. But as far I’m concerned, it’s Telltale’s ideal an official ending because it was in the trailer. Idk though that’s just my take on it.