Respond With A Quote From Anything 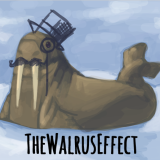 TomPravetz
January 2011 edited October 2017 in Forum Games
Just like the other thread, but easier. And yes, I am a thread thief. Just, please, try to make it flow...