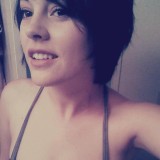 Has anyone figured out which Fable/Story she might be from? I was thinking she could possibly be based on Vasilisa The Beautiful but that is just speculation. Any guesses?