What Final Season Design Choices would you like to see? Character Designs, Community Ideas, etc. 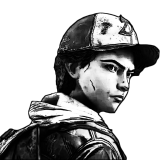 What kind of design choices would you like to see in the final season and your reasons for wanting them. This includes character designs, community ideas, characters and their background and personality ideas, fan-made concept art, types of music you would like to see, types of scenes you would like to see, etc. If you have made final season fan-art or have written a story for some of these concepts you are welcome to post them here.

Here are some examples:

Character Design: I'd like to see the major characters wear backpacks and have weapon holsters so it isn't a mystery where they get their stuff from and where they put it away when they're done with it. No more pants with magical pockets that can hold vast amounts of supplies in them! For example season 1 was the worst when it came to this. Like most people, I loved season 1 and those puzzle sequences and hubs were amazing but I am convinced that Lee had a magic pair of pants considering the way me shoved that huge blow torch down his pocket, climbed the ladder and then pulled it out of thin air. Animations where Clementine puts things away and retrieves them from her backpack would be a nice feature.

Also as for Clem's hair: I'm not a fan of her new hairstyle but the thing that bothers be the most about it is that there is one side that is shaved. How did Javi acomplish this with only a pair of scissors? I don't know about you, but I didn't see any hair buzzers around. Anyways I messed around in photoshop to apply hair to the shaved side and I thinke it looks much better: I think it would be cool if Clementine's hair grows and changes over time in the final season. It starts out like how it is in ANF episode 5 and as the series progresses it gets longer so she decides to tie it up. The player can decide to tie it up in the two nots like before or just one tight bun.

I also feel like in the final season episode 1 they have to continue the streak of the main protagonist getting some form of an injury some time during the first episode. Season 1 Lee hurt his leg. Season 2 Clem got bit by the dog. ANF Javier gets knifed by Eli which barely missed his eye. Clementine in ANF either looses her finger, gets a scarred forehead, bullet scar on cheek, or a tattoo which is kind of like a scar.

Here is my attempt to give Clem a scar: Community Ideas: It would be cool to see a community that has been built out of an old highschool. The cafeteria has been converted into a market, classrooms have been made into apartments, they use the cameras throughout the school for security, etc. Clementine can walk around and speculate what her life could have been.