My thoughts on the ending of the final season 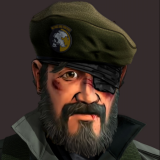 Here are my thoughts on the end of the final season and thus the game series as a whole.

When speculating on the ending, there are a number of things to consider:

Death of the main characters

In order to have a satisfying ending, Clem's (and by extension Lee's) "legacy" (like survival techniques, morals and philosophy; the player's decisions for the most part) need to be carried on by someone. To put it in other words, if Clem dies without a "worthy successor", the entire series will feel wasted. Well, in my opinion at least. So with this in mind...

Highly unlikely. I just don't feel like there's anyone who could succeed Clem other than AJ, so at least one needs to survive.

Possible, but not very likely. Though Clem would still be alive, she would have failed her "objective" of keeping AJ safe at all costs. This would most likely change her for the worse and make everything from the end of Season 2 to the end of this season feel kind of wasted.

More likely than I'd like. AJ would need to be safe and Clem would need to pass on her legacy to him before she dies for this ending to "work". Made more likely by: possible book-end with Clem dying like Lee did, heavy foreshadowing and shock factor. Made less likely by: predictability, AJ still being too young and the emotinal bond that players (and even Telltale) have developed with Clementine.

Neither Clem, nor AJ

Pretty likely. Though it'd be harder for Telltale to make an emotional ending this way, this is the "safest play" for them.

One of the most prominent themes of the game series is the dilemma of always being on the move vs settling down (and by extension: going with groups vs staying relatively alone), so I wouldn't be surprised if the very last choice would be related to this.
I also think that it's very likely that we'll get multiple endings.
Lastly, I'd like to discuss some of the achievements for Episode 4. They don't reveal that much, but if you want to avoid even the smallest spoilers, then I don't recommend clicking the show button. 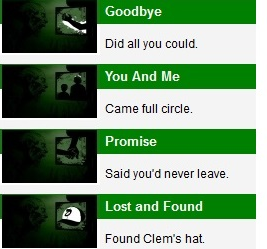 Thanks for reading my post, I hope I didn't bore anyone to death with my wall of text.