What Could've Made The Final Season Better? 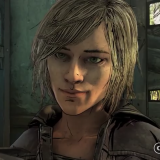 I wish TFS was more violent. Sure it is pretty gruesome at some parts, but I wish there could've been more. Like Kenny killing Carver and Michonne letting Norma die is the kinda brutality I love in the Walking Dead. I would've absolutely loved to see more of that in TFS. I wanted to see Clem rip some fucking throats out. Let's say her leg wasn't fucked up but got bit regardless. It would've been so badass to see her killing Walkers barehanded. Ripping Walker's spines out through their throats is the shit I would've loved to see Clem do. Whenever AJ is in danger - Clem just goes S5 Rick on their asses.
EDIT: A scene I would've liked to see would be Violet vs. Minerva. I would've loved for Clem and Violet to show affection for each other in front of Minerva - just to rub it in her face. Clem and Violet vs. Minerva. I also would've enjoyed more partnered fights. We had Clem and AJ vs. Abel. I wanted to see more of that with different characters. We got a lot of Clem vs. ___. But I would've enjoyed seeing the kids fight along side Clem against Lilly or Minerva. Kinda like Kratos and Atreus vs. Baldur.