Last post for for right now :). Guys I think I know who Clem thought was dead. Please read 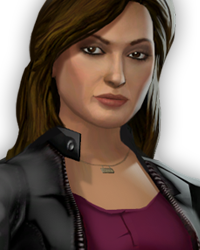 Found a pic of Carvers group in season two. They are Troy, Mathew, Walter, and Johnny. These are legit. One of these guys might be who she thought was dead during the 16 month span. I will post the link and pics of these guy for episode 2. So this should prove she didn't see Kenny or Lily. Walter the Old looking guy might be who she thought was dead. He looks like he's threatening Clem's group.