Which theories, did you have while playing TWD for the first time. 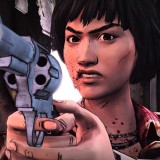 When you first, played the games did you have any theories, that afterwards really made you laugh, or think god what was i wrong about that.

Well this, are the theories i had while playing, the games for the first time.

I actually, believed Carley was the one stealing the supplies, I kinda didn't like the way she suddenly threw herself at Lee.
Because i found it abit random, how she first was totally into Doug, and suddenly she apparently out of nowhere, starts flirting with Lee, and kissing his cheek.
So that kinda made me suspicious of her, so in the RV-Scene, i actually said that i thought she was the traitor xd.

Also, when playing the first episode of TWD S2, i thought Uncle Pete would have allot of screen-time in the story, and would be kinda like a father figure to Clementine, abit similiar to Lee.

And, when i played the Michonne episodes, i thought Samantha would be the protagonist in S3.
Seems, i was wrong on that one to since her character is now made determinant.