What are some terrible Walking Dead game ideas that you would never buy? 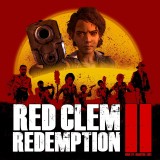 When The Final Season ends I think Skybound said that they would like to keep doing Walking Dead games. So what are the worst ideas you can come up with?

What are the title and maybe a description of the game?
Try sell your shity game idea to us.