Are you more excited for Walking Dead Season 4, or Wolf Among Us 2? [Poll] 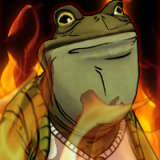 Poogers555
February 2018 in The Walking Dead

Gonna post this here because Wolf section is pretty dead because most conversation is just "Hope itll be good."

So, out of curiosity as of right now what game are you more excited about? The long awaited sequel to Wolf Among Us, or the final season of Walking Dead? Remember to share your thoughts on why you are excited for which game!