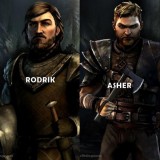 So, I've started on a new story, but this time, it's interactive. The way I'm writing this is by (if you want) posting an Episode that introduces the character's start in the ZA (please be specific). If you'd prefer to have any characters you may submit have a mysterious background, then please say so.